I’ve had this thing for almost a month now, and I never managed to make a hyphen with the handwriting input, but today I made one by accident. Talk about the little pleasures of life.
Anyway, a hyphen is made by first writing it forward and then backwards on top without lifting the stylus. Just a short line forward and backwards on the same spot.
– – – (see 🙂
Other little things about the graffiti come to mind.
Writing an ‘I’ maiuscle took some time too. The secret is to draw the serifs too. First the short horizontal bar above, then the stem, and at last the short horizontal bar below. As always each letter should be drawn in a single movement. 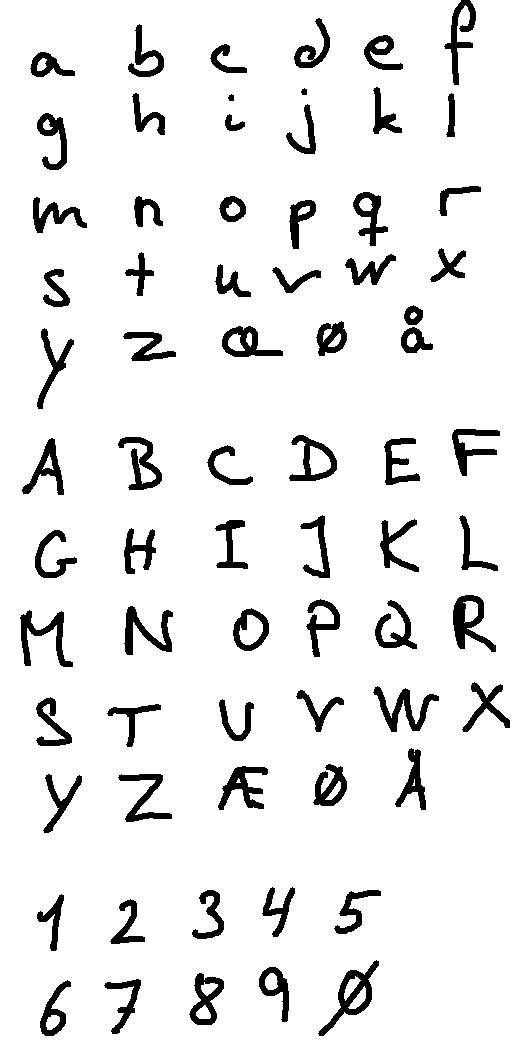 An ‘f’ minuscle often becomes a ‘t’. Here the clue is to exaggerate the upper curl to distinguish the ‘f’ from the ‘t’. It isn’t even necessary to draw the stem below the baseline.
My sloppy ‘n’ often becomes a ‘u’. I start with a down line, then up and down to make the arch. If the down and up movement doesn’t coincide it sometimes becomes a ‘u’. The only thing to do about it is to be less in a hurry.
My name is difficult when writing in English. For some reason I cannot convince the graffiti to recognise a ‘é’. I’m forced to use the ‘&!é’ button, but that also prevents me from entering my name in the dictionary.
This is turning into a novel – born from an accidental hyphen.
There are some issues with ‘g’ minuscle. If the circle isn’t closed, it will often become an ‘s’ or ‘S’. If it is written too high on the baseline, it can easily become a ‘9’.
Correcting mistakes.
Most often I write a few words on the input line before waiting for the handwriting recognition to set in. I then check the result.
Wrong letters are corrected by writing the correct letter on top of it. The wrong letter is then replaced with new one.
Missing letters can be inserted by writing them between two letters. A missing space is inserted by drawing a rigthwards line over the letter that is to follow the space.
Superfluous characters can be deleted by drawing a leftwards line over the characters to be deleted.
There are other gestures, but they’re all in the manual.
The graffiti isn’t as fast as a real keyboard but for me it is faster than the onscreen keyboard.
Postscriptum:
One weird thing is how the 770 has made little changes to my normal handwriting. I’ve always ended a ‘d’ with a down-stroke to make the final serif, the ‘tail’, but after I’ve started to use the 770, I’ve stopped making that down-stroke. It works better that way with the stylus.
– – – – – – – – – – – –
(All the above was, naturally, written with the Nokia 770 and the grafitti).

That is why I am waiting at least till maemo 2.

If we all wait the product will fail and there will be no Maemo v2.