External storage on the Nokia 770

The Nokia 770 has limited storage capacity. RS-MMC cards exist up to 1Gb and phones seldom has more, most a lot less.
To watch movies or listen to music you need more storage capacity.
Looking a bit around on a 770 with an Xterm reveals that the kernel has support for both ext2 and ext3 filesystems often used on harddisks, and it has support for the nfs network file system.
On a system with limited ressources like the tablet such features would not have been enabled unless they serve a purpose.

While the Nokia 770 officially only supports usb peripheral mode (used for accessing the the memory card from another computer, i.e., the 770 is the peripheral) it is well known that it can be switched to run in usb host mode, having other usb peripherals attached. That could be a self-powered usb harddisk since the tablet is unable to supply the power the usb port normally supplies.
The main obstacle for doing this is the type mini-B usb socket on the tablet. All the usb disk enclosures I have seen use either the same type mini-B usb socket or the larger type B socket. I still have to find a type mini-B to mini-B usb cable. There are some type A (female) to type A (female) adapters on the market but I haven’t been able to find one around here. That would allow you to connect two type mini-B to type A cables to form a type mini-B to mini-B cable.
So it should be possible to get a harddisk on the Nokia 770, but there is a basic connectivity problem, that is, the lack of the proper cable to connect the two.

As for NFS the only thing to do is to gain root on the tablet and try to mount something. After all, the network is there.
Here’s a transcript of an NFS mount. It is fairly straightforward, only the actual mount command does take some time.

So it works. If the connection to the access point is good enough, it is possible to watch movies from an NFS server.
By making a symlink from below /home/user/MyDocs/ to the mount point, the files become browsable with the File Manager. 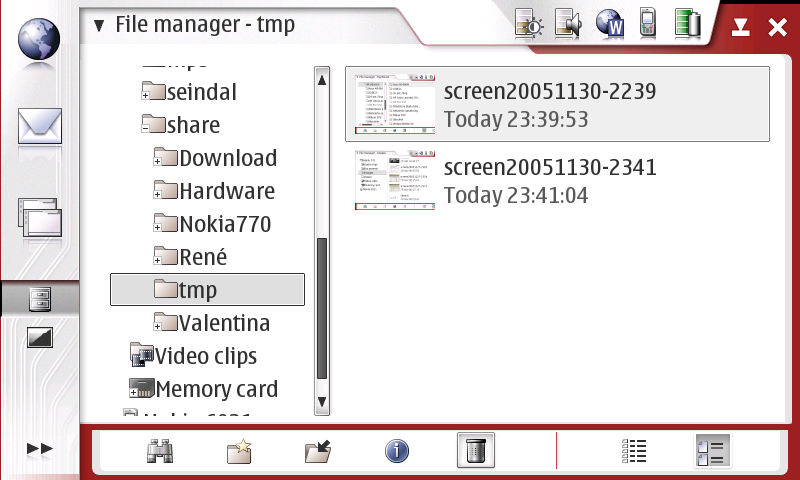 Not GUI interface to NFS

There is no interface to NFS on the tablet.
You have to flash it to R&D mode, run an xterm, do weird things to become root and issue obscure mount commands.
It is probably because the Nokia 770 isn’t marketed as a toy for Linux nerds, but as an internet appliance for people on the move. How many of these have an NFS server at their disposal? Very few, probably, so for the intended user segment an interface to NFS would just complicate matters for very little gain.
It would probably be quite useful for the rest of us, who bought a Nokia 770 because it was a cool way of running Linux on a different platform.
A graphical interface to NFS mounts cannot be installed by the Application Installer which doesn’t run as root, so even with such a program it would still be necessary to flash the tablet to R&D mode and run commands as root simply to install it. Later file systems could be mounted and unmounted without needing root access, based on a couple of added lines in /etc/sudoers.

How did I get here

There are a few good spots to examing to learn about any given Linux system: /etc and /proc for starters.
The file /proc/filesystems lists all file system types supported by the kernel, and on the Nokia 770 it contains among other things these lines:

Most of the other file system types listed in the file are actually in use on the 770, but ext2, ext3 and nfs have no use on the tablet if compared to what Nokia says it will do.
A simple mount command confirms that they’re not used by the system.
I’m quite sure they’re not left them on the system by mistake, so Nokia must have something up the sleeve here, or at least have decided to keep these options open in the future.

9 responses to “External storage on the Nokia 770”