A few weeks ago we got our Reed Paddle Suits, and we had to try them immediately. The weather was nice and calm – there wasn’t a wind blowing and wave height were to be measured in centimeters – so we decided to skip over the island of Saltholm a few kilometres off the coast of Amager.

Saltholm is so close by, but since it is so flat (highest point is 3m above sea level) and it is a few kilometres distant, you can’t really see from the beach. And yet, it is just over there.

The trip over there was almost eventless. No wind, no waves so we just paddled and chatted along. At the edge of the sea lane we halted. Some fairly large commercial freighters pass there, and they’re far faster then us, so its important not to overestimate the distance and believe you can pass in front of them. Often you cannot. 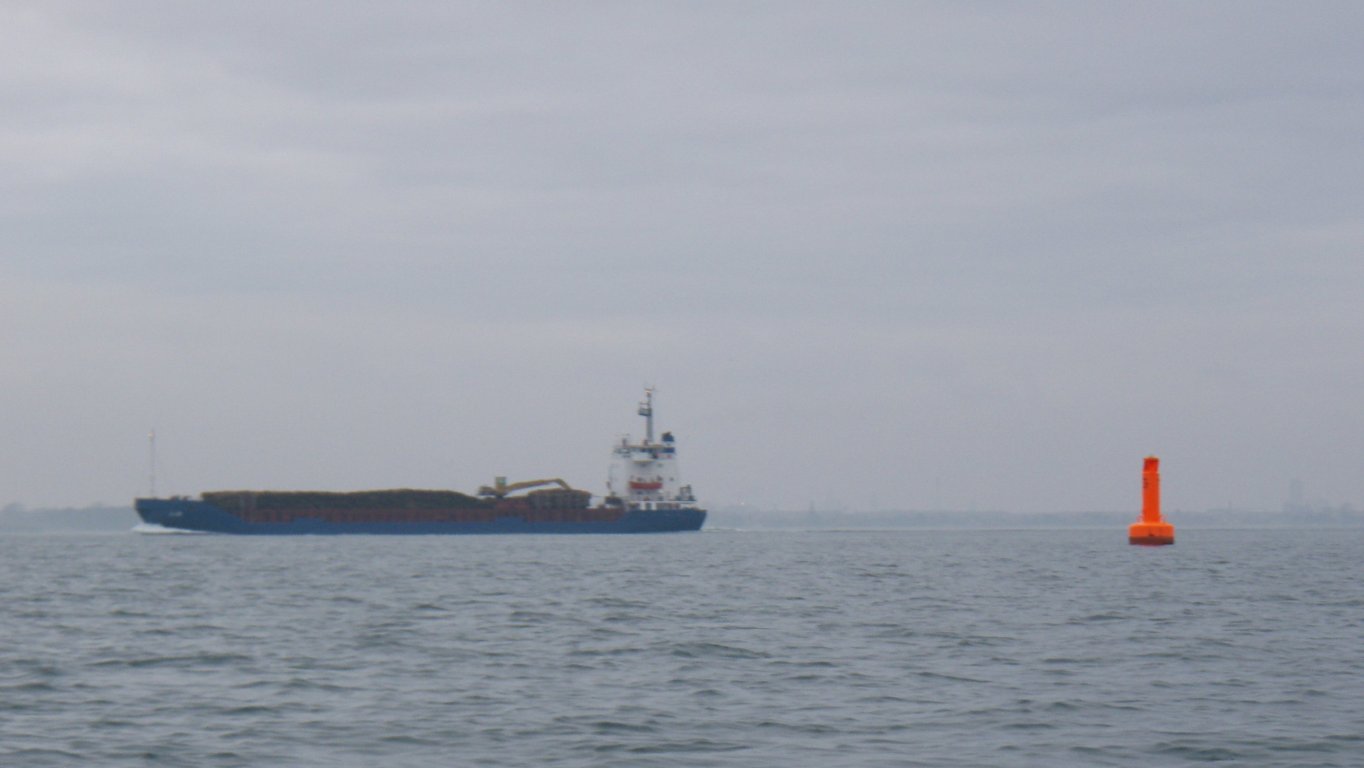 In a kayak you’ll normally paddle 5-10 km/h, the equivalent of 3-6 knots, but the ships out there can often do 20-30 knots. They’re a lot faster than you’d expect, and the speed seems even less when they’re heading directly towards you.

We waited for the ship we could see up north at the wind turbines at Middelgrunden. When it was in front of us we moved forward and passed a few hundred meters behind it, where we caught a little ride on the swells it made. They must have been about 1.5m.

The waters around Saltholm are very shallow. There are less then 2m water in a wide area all around the island, and once we had entered that area there were no other traffic than a few speedboats. Since there are many huge boulders just under the surface most boats keeps a modest speed.

We paddled to a low bridge straight east of Amager Beach Park, called “lusebro”, the Lice Bridge 🙂 We had to drag the boats in the last 15-20m because the water became too shallow for paddling. The bridge was stoney and rough but we found a platform to sit on, and we took out our storm kitchen to make hot coffee and chocolate, which we enjoyed with biscuits and chocolate. 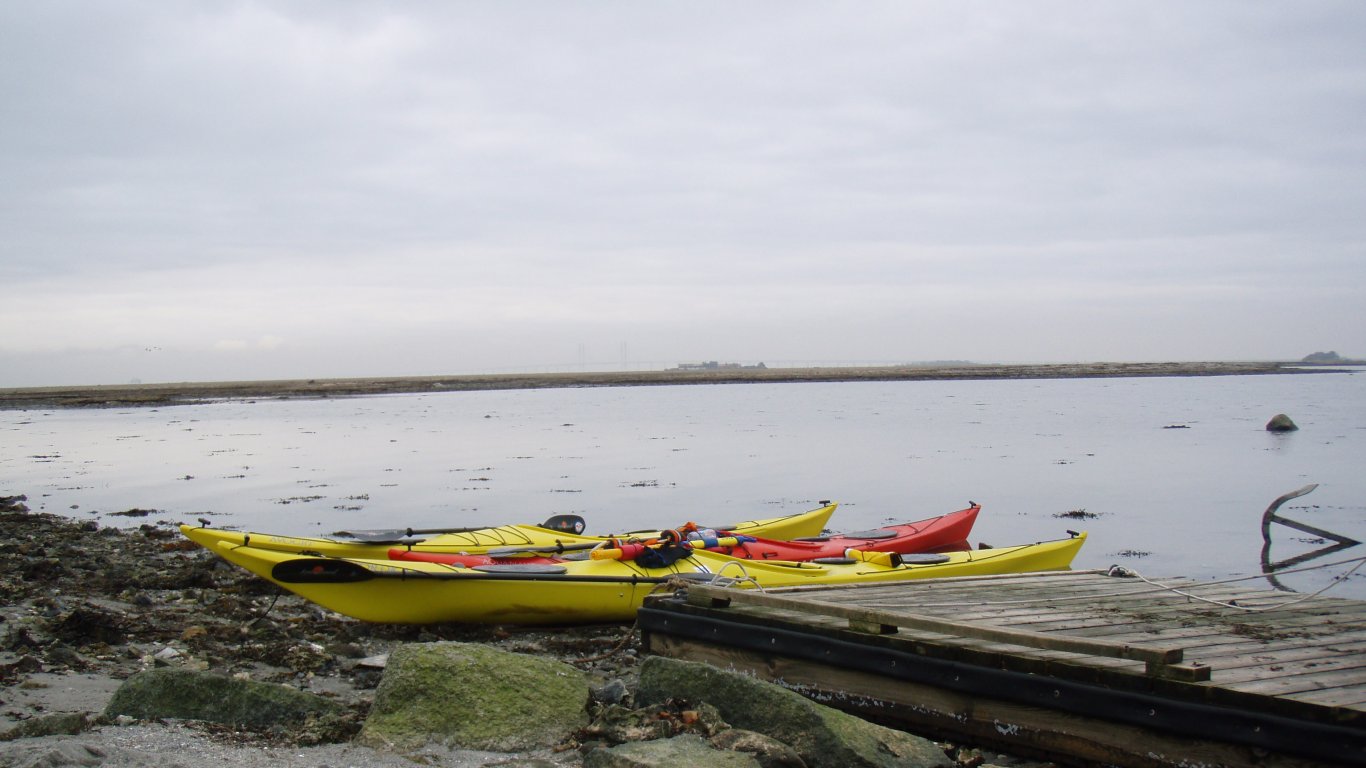 Saltholm really is flat. You could see Malmoe in Sweden straight across the island and the only visible feature are some low hills with trees. There are a few houses over there, and a real boat bridge named Barakkebro further north. It is the only place on the island where larger boats can legally approach.

In the sping and summer Saltholm is mostly closed to visitors. It is a breeding ground for a lot of sea birds, one of the major breeding grounds in the Ã˜resund area, and it is illegal to land on the island from first in April to mid June, so the birds won’t be disturbed. In that period only Barrakkebro and the northernmost part of the island can be approached.

On our way back we noticed at lot of stones in the water, but strangely they moved around. Some changed shape, some grew and others diminished. Many smaller stones would appear, only to disappear after a while and reappear elsewhere.

As we came close we discovered that they weren’t stones, but boulders with seals on top. They were sun bathing until we disturbed them. The smaller movable stones were seal heads keeping a keen eye on all our movements. We gathered and stopped paddling, and the seals came a bit closer to inspect us, and more joined them. At last we had 8-10 seals around us, but they always kept a safe distance. They watched us and we watched them. 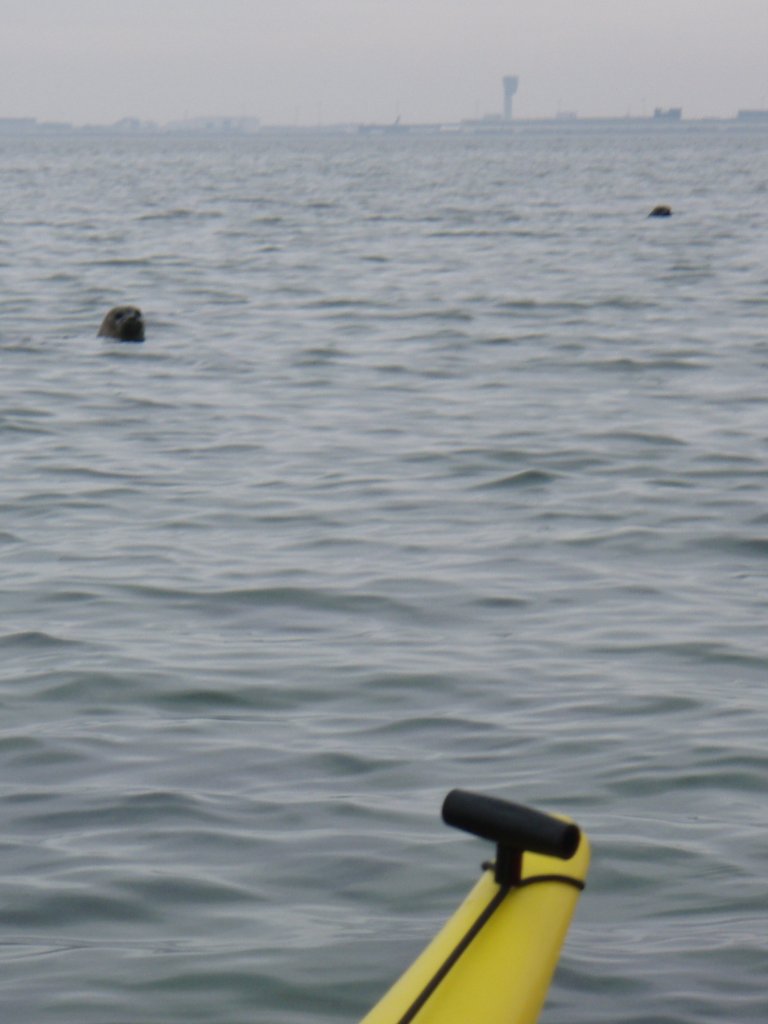 It was a fantastic surprise to meet so many seals there. I had read that there were seals at Saltholm, but I expected them to be on the other side, away from the coast, where they would be more secluded.

After a while we had to say goodbye to the seals. We were drifting and got too close to the sea lane again with the risk of unpleasant close encounters with huger boats.

The sea lane is, where we passed it, marked with large coloured buoys. They must be some 3m in diameter and some 5-6m in height. Closest to Amager they are green, in the middle orange and white and towards Saltholm red. Southbound traffic moves in the rightward lane, closest to Amanger, between the green and white/orange buoys, while northbound traffic moves on the Saltholm side, between the red and white/orange buoys.

The buoys are so big they can be seen on the satelite images of Google Maps. Here are the red, the white/orange and the green buoy which we passed on our return across the sea lane

Saltholm is close and it is not hard to getthere, but we have to respect that it is not our island and that it is a natural reserve. You can read about the rules for visiting Saltholm at the site of Skov- og naturstyrelsen (Danish). In brief, you can go there most of the year, except April-June, and you have to maintain a safe distance from the southern end of the island, the areas called Koklapperne and Svaneklapperne.

I brought a GPS unit. Here is our trip as rendered on Google Earth. 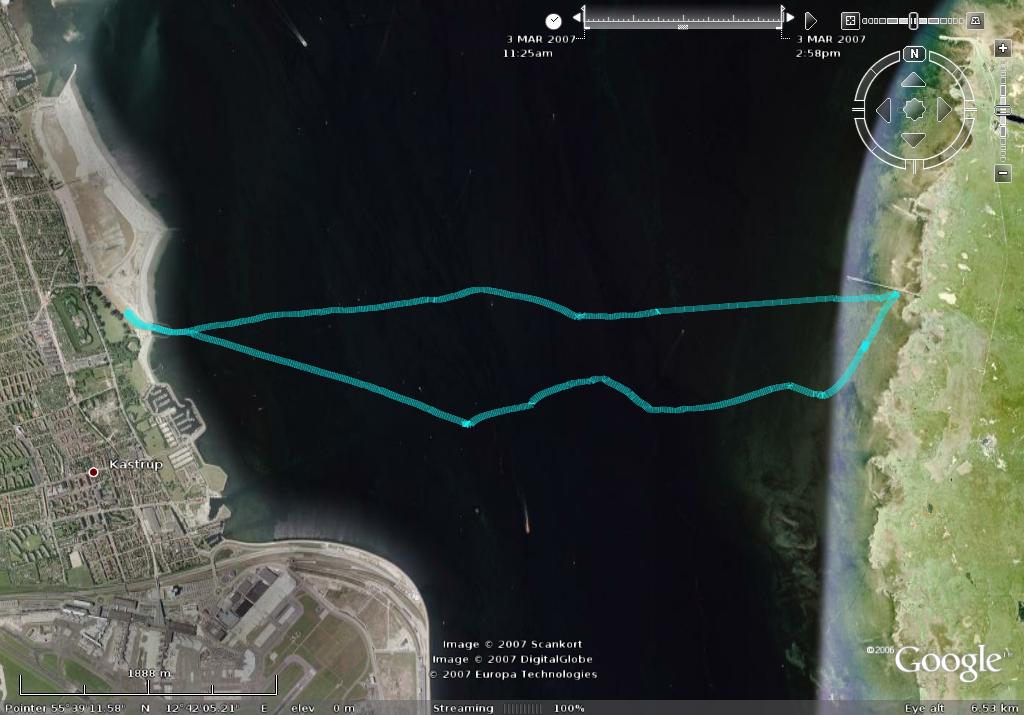