April 25th is the day of St. Mark, the patron saint of Venice since his relics were taken to the city in AD 828. I haven’t heard of any official celebration, maybe because the day coincides with the national celebration of the liberation of Italy after WWII. Anyway, Marco (not San Marco, just Marco 🙂 ) and I decided to go paddling in the lagoon, since the forecast promised a splendid, almost summe like, day.

I started the day in Mestre, so I had to take the ferry to the Lido, where I saw this pretty sight. 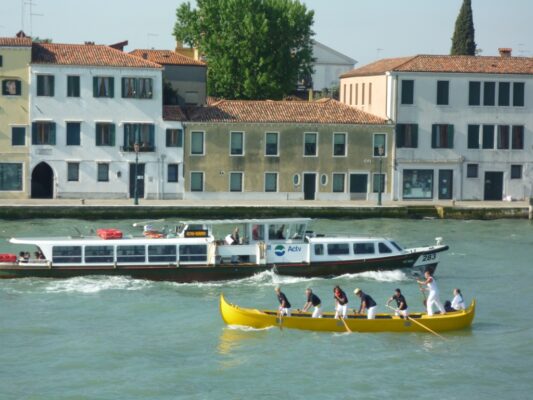 The boat looks like one of the municipal racing boats, but the rowers didn’t look very expert. They had loads of problems with the waves you often find in the Canale Giudecca.

From the Lido we headed for the island of Sant’Erasmo, often called the vegetable garden of Venice. There are some 70 small farms on the island, and only a few hundred residents. The island also have a few canals between the fields and gardens, though they’re well hidden. We had to paddle through a lock to paddle into the island.

It is a very green places 🙂 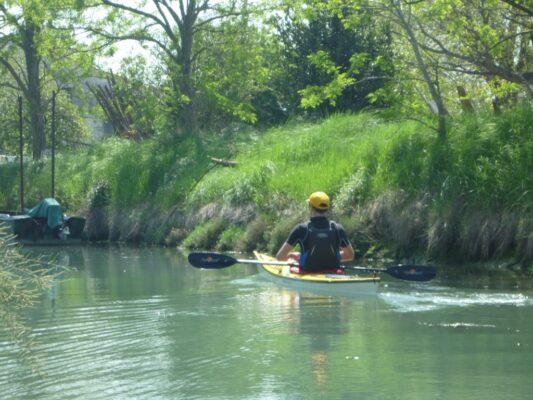 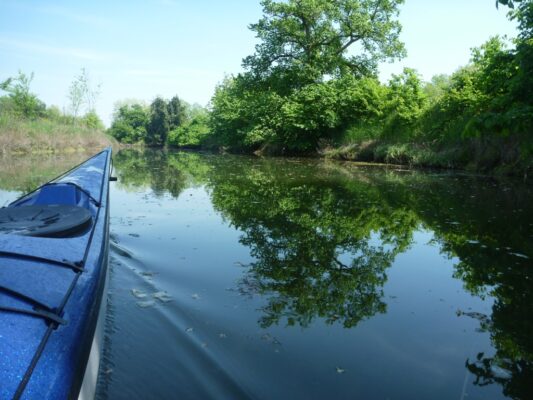 We found this abandoned sandolo in one of the canals. It looked like it had been a beautiful boat, but it might be beyord salvaging now. 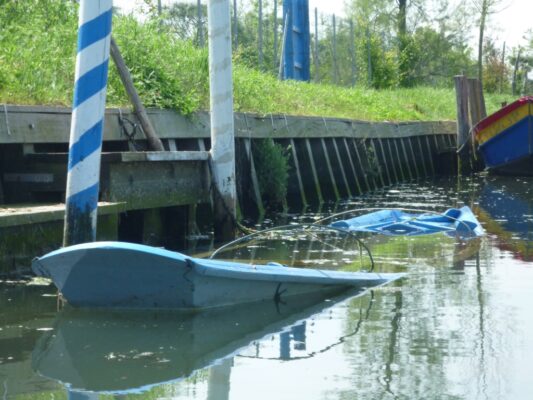 The canals were full of life, like small fish, transparent prawns and loads of crabs. Here’s one taking a stroll on my spraydeck. 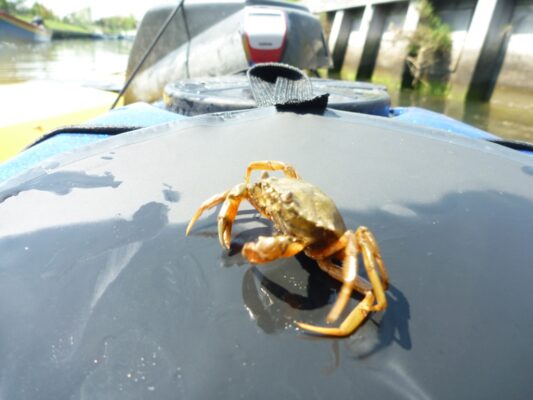 We also happened on this old gondola in front of a couple of farm houses. 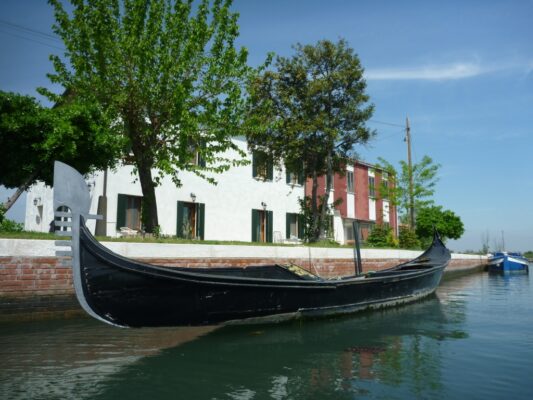 From the canals of Sant’Erasmo we paddled around the Lazaretto Nuovo, to a corner of the lagoon I hadn’t visited before. Behind the Lazaretto Nuovo are the defensive walls of the island. We had to paddle through some very small canals in the marshlands to follow the wall, but we got through and were spared having to back out again, through all the hairpin turns. 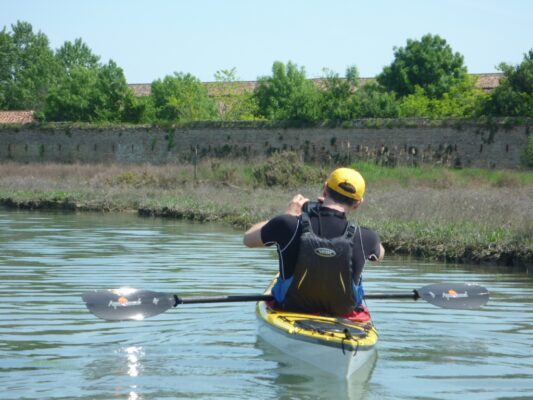 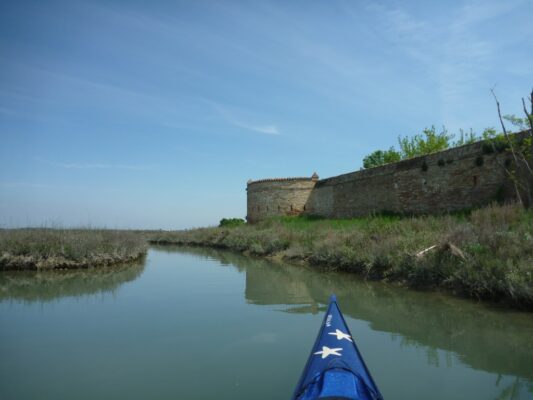 From Lazaretto Nuovo we continued towards the island of Burano, our chosen lunch island. We were getting hungry but still had a few kilometres to paddle. Burano is my faviourite island in the lagoon. Its quite small, about 3500 inhabitants, and really cosy.

Here’s the leaning campanile of their main church. 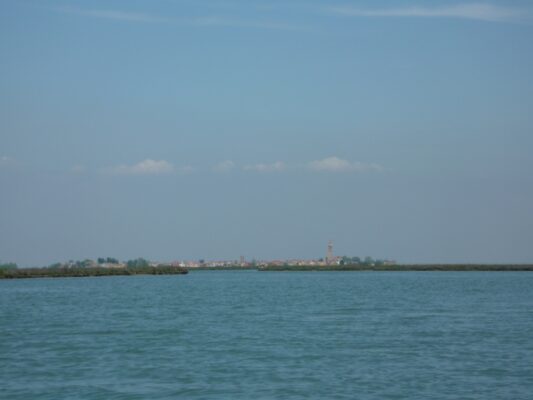 This is the abandoned island of Madonna del Monte. It use to be a monastery, but it was abandoned in the late 18th century, maybe as a consequence of Napoleons conquest of the Republic of Venice. He did close down a lot of monasteries. 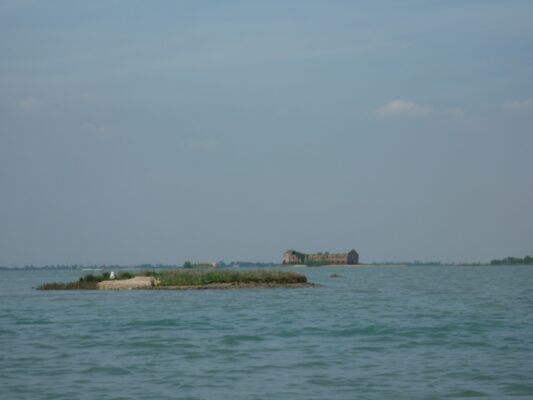 The leaning tower of Murano again. 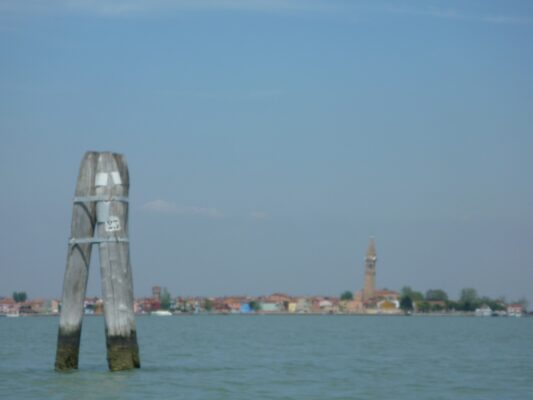 Marco paddling towards a nice lunch, with the skyline of Venice in the background. 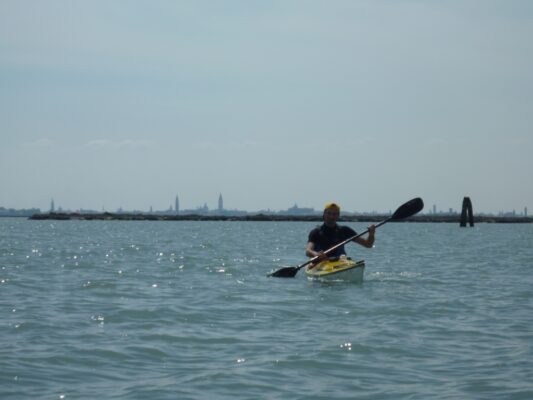 On Burano we saw this little boy walking a rather large dog. 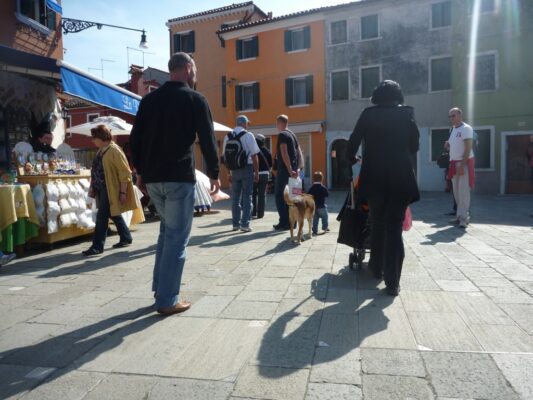 The coloured houses of Burano are fantastic. There’s every possible colour there, its like paddling on a painters palette. Notice the man taking a photo of us. Natural selection has provided him with optimal camouflage 🙂 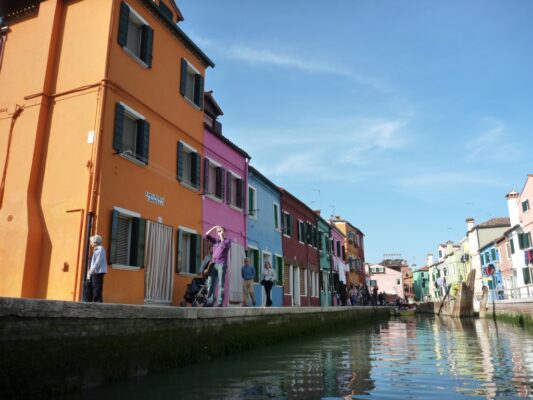 They were doing some maintenance on the canals on Burano, and several passages were closed. They weren’t closed well enough, though. 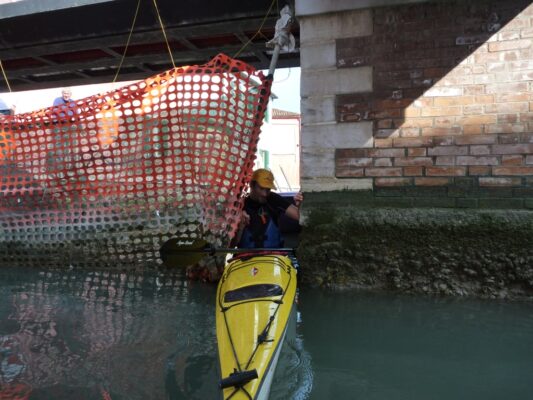 When I get rich I want an orange house on Burano. It doesn’t have to be big, just orange 🙂 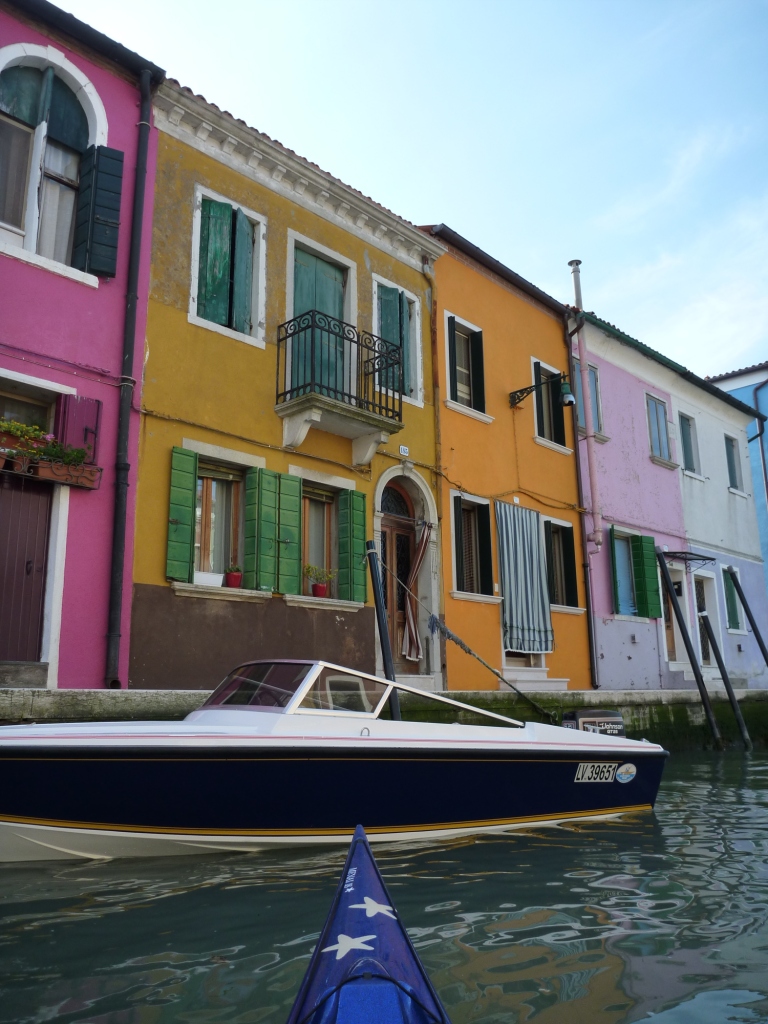 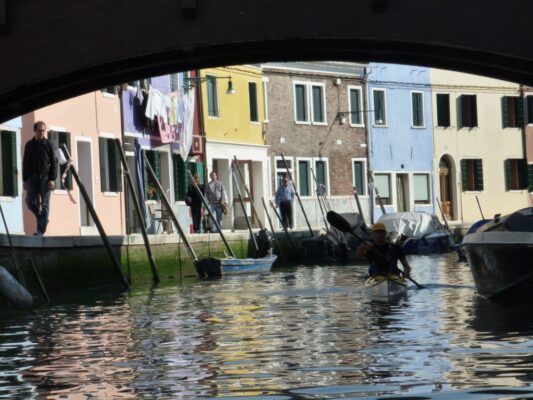 Just behind Burano is the island Torcello, the site of an abandoned medieval city. Now only two churches are left. They’re repairing the campanile, it seems. It almost looks like a modern high rise building in the lagoon. 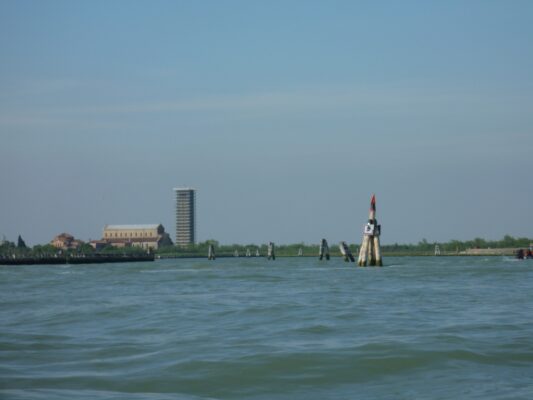 At the entry of another canal on Burano we saw this little gem. It is a traditional boat of the area, a BatÃ¨la Buranela. Its an old type of freight boat used in the lagoon, for example by the farmers on Sant’Erasmo for bringing their produce to market in Venice. Very few examples exist now, they can probably be counted on one hand. One of the rowing clubs in Mestre has a Betela a coa de gambaro of recent construction, I saw it there last year. 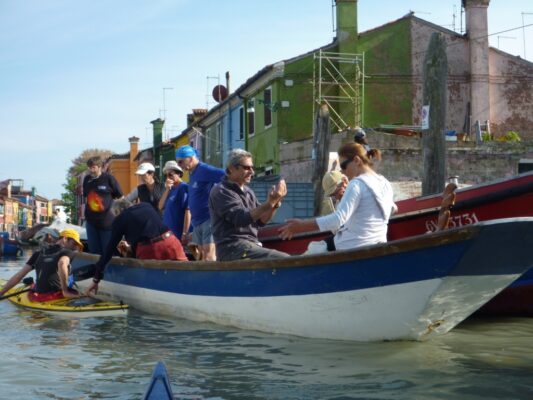 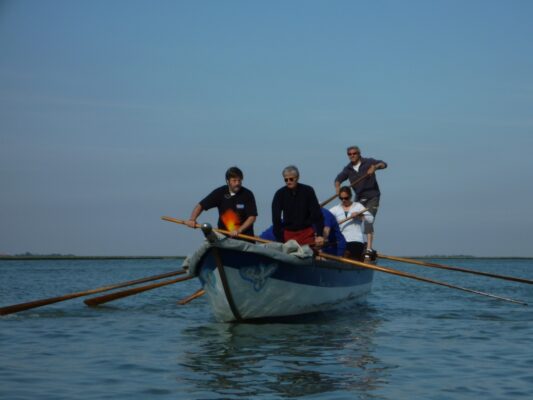 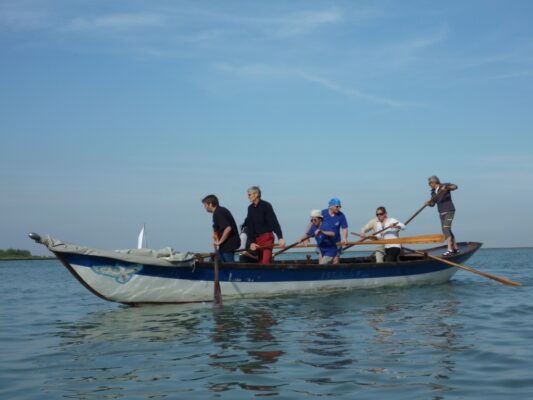 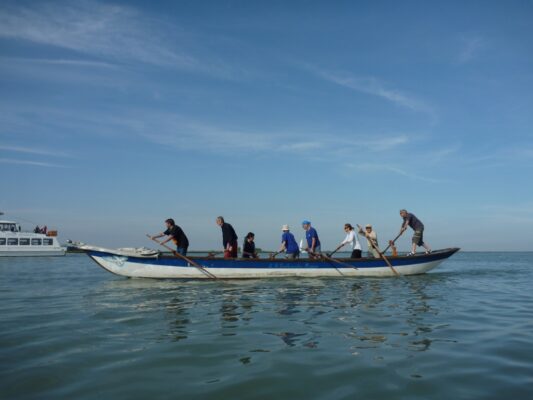 It was five in the afternoon when we left Burano, and the tide was very low. Many of the passages we’ve used the last years were now too shallow for passage, even in a kayak, and we had to ‘seal’ our way for a while, and in the end we just got out and pulled the kayaks across until we had enought water for another stretch of slow paddling. 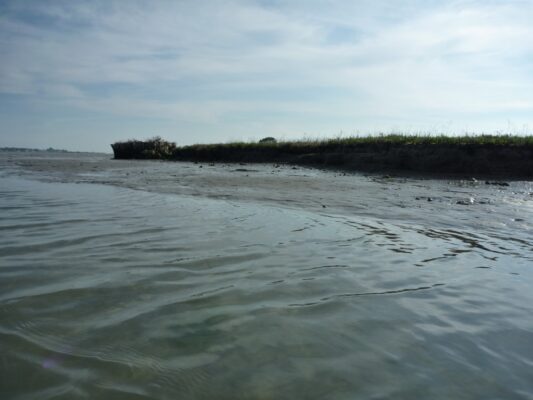 The shallow sandy bottom was absolutely crawling with small crabs. When we walked across the shallowest places they would stand down in the 5cm of water, waving their little fists at our feet, and if we got too close they would either scuttle away or dig themselves into the sand.

There were so many we had to be careful where we put our feet. This one seemed to find the camera rather intimidating and decided to dig in. 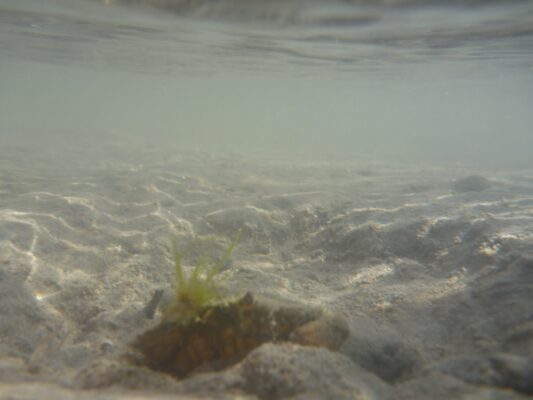 Somehow its impossible to go paddling with Marco without him getting all giddy and silly at some point. 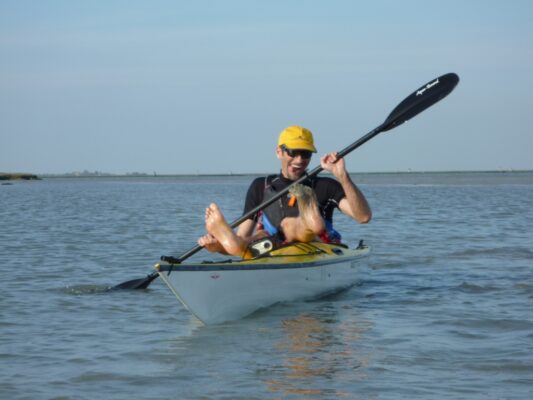 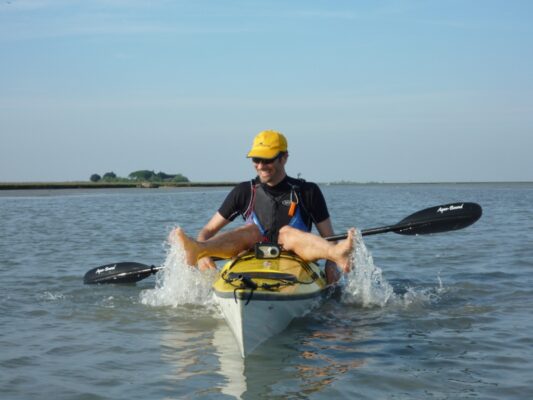 It might look like a very dramatic capsize, but the truth is we only had about 20cm of water there. An actual capsize there would be quite a feat. 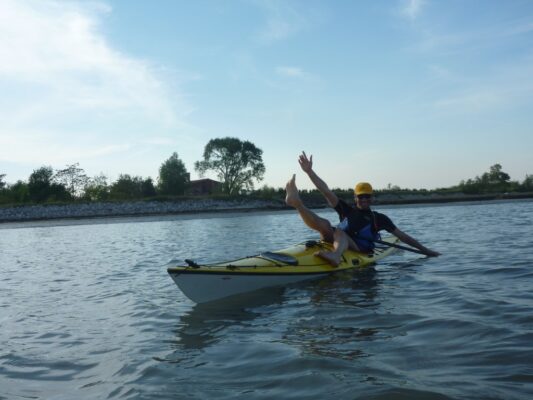 Another crab taking a walk on my front hatch. We returned to the Lido shortly before sunset, under this sky. 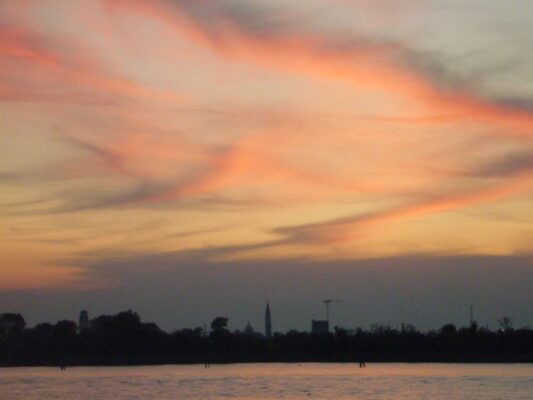