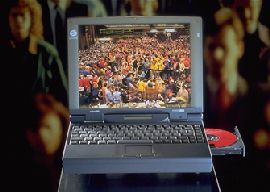 The basic news is that Linux works on Olivetti Echos and Echos Pro laptops. The OS works, LILO works, the peripherals work. XFree86 3.3 works well with the Chips&Technologies chipset of the Echos series, and but supposedly not with the Cirrus Logic chipset of the Echos Pro series (driver stated as supported, but broken, as of XFree86 3.3.3.1).
I have personally installed Slackware (up to 3.6) with Linux 2.0 (up to 2.0.36) on a Olivetti Echos P100E, and I have confirmation that Linux works on the Echos P100C, P100D, P100E, P120S, P120E and on Echos Pro P133. I’d be surprised now if anything on the Olivetti Echos didn’t work right under Linux. Some parts, such as PnP sound might take a little extra effort.
I no longer have a valid link for an online catalogue of the Olivetti Echos Series. See the links section for a link to Olivetti’s support site. There are still pages for the various models.
If you have comments about running Linux on the Olivetti Echos laptops, you can post you messages here: Add your comments

About the Olivetti Echos laptops

The various Olivetti Echos and Echos Pro models, ranging from Pentium 90 to Pentium 150, have the following features:

Any modern distribution of Linux should install fine on the Echos. I have personally installed Slackware 3.1 with no serious problems.
The Olivetti laptops come with a dual Win95/WfW setup, and you have to choose which system you want the first time you boot. The other system is deleted. There is no selection for “none”.
The first time (on a computer I had to return due to a minor hardware fault) I chose Win95, and the installation blocked in a hardware-detect. After 20 minutes I turned the thing off, after which it wouldn’t boot. Linux to the rescue. I made bootable floppies with FIPS (on another machine) and repartitioned, booted Linux from floppies, made a backup of the DOS-partition on a Linux partition (the ramdisk holds mke2fs, mount, umount, tar and the msdos file system), and went for a complete reinstallation of DOS/WfW. I received no driver-floppies for the CD-drive, the sound card og the graphics card, but could extract it all from my backup under Linux. Amazing how Linux always helps when DOS/Windows screws up.
The second time (on the replacement computer I received) I chose the WfW installation, and everything went smoothly.
I reckon a normal installation will be: (1) install selected Windows system at first boot (obligatory); (2) repartition using FIPS; (3) install Linux.
To install Linux from at CD-Rom, you need the cable that comes with the computer to attach the floppy drive to the parallel port. The procedure is as follows. Turn the computer off. Place the CD drive in the bay, and connect the floppy drive to the parallel port with the cable. Fasten the screws firmly. Now turn the machine on and press F2 to enter the setup. Find the configuration menu for integrated peripherals and change the mode of the parallel port to FDD mode. Initially it will probably be “Uni-directional” or “Bi-directional”. Save and exit the setup, and when the system boots, the now external floppy drive will be A:. From this point on your have a normal system with both floppy and CD-ROM drive and you can install as usual.
To revert the parallel port to normal usage, boot, enter the setup, change the parallel port mode to Uni-directional (for normal printing) or to Bi-directional (for use with a ZIP drive or similar), save and exit. I have been told not to attach or detach the parallel cable while the computer is on, but I have done so with the computer in the suspended state (i.e., with the lid closed or by pressing Fn-F2). To switch the mode of the parallel port, you have to boot to enter the setup.

The Olivetti laptops uses a Chips and Technologies chipset, the CT655XX models (on my P100E it is a CT65548). This chipset is supported by the Xfree86 SVGA driver.
I have been told that the Echos Pro series uses a Cirrus Logic chipset (the CL-GD7548), which might or might not be supported by XFree86. More information here

The Olivetti Echos come with a SoundBlaster Pro compatible card.
I received no documentation or floppies for the card, but I found some settings in the Windows setup, getting the basic parts to work. All in all I have received the following information on using the sound driver under Linux:

The situation is more complicated on the Echos Pro, as the sound adapter is PnP, requiring isapnptools to be used.
The Linux sound driver works well (at least for me). It plays .wav files in mono and stereo, I can record sounds using the internal microphone, /dev/audio works and I can play audio CDs without problems. To play audio CDs you don’t have to load the sound driver, but then you can’t change the volume.

The Echos offers three automatic power management features: turning off the hard drive, the LCD display, and putting the entire system into suspend mode (pressing Fn-F2).
Power management for the hard drive doesn’t interfere with Linux at all. The hard drive spins down as often as Linux will allow it to. The hard drive spins back up when it is needed. (The drive doesn’t seem to spin down when my 3c589 PCMCIA card is in use — rs).
Turning off the display haven’t been tested, as I run X all the time. The X screen blanker works in the normals fashion, and therefore leaves the backlights on always.
Suspend works, in console mode and under X. Pressing Fn-F2 or closing the cover puts the computer in suspend mode (closing the cover might not suspend if you have PCMCIA cards inserted, in which case only Fn-F2 works). Under XFree86 3.2(A) at 800×600 (256 or 64K colours) the display comes back as expected, and the system reacts as usual.
The laptops supports two different kinds of suspend mode: Suspend To Ram and Suspend To Disk. The “Suspend To Ram” mode shuts down all peripherals but keeps refreshing the memory, thereby using a minimum of power. The “Suspend To Disk” writes the complete system state to disk on a special partition (type STD) and shuts down the whole computer. When the power is turned on again, the bios reloads the saved state. This is intended for emergency shut down when the battery is dangerously low on power. “Suspend to Disk” works, but does cause problems with the sound chip and PCMCIA cards. They have no power in suspend mode, and can lose internal state.
I have no measurements on battery time. Olivetti says 1,5 to 2,5 hours, but it seems to more like 1 hour.
I run apmd 2.4 with no problem. The two user programs, apm and xapm, does cause problems. With xapm running the mouse occationally behaves erratically, and running apm in a tight shell loop virtually kills the mouse. Somehow the opration of the two programs interfere with the mouse. This was with Linux 2.0.0 (no patches).

I only use a 3Com 589 Etherlink III adapter, and it works flawlessly. I installed the Slackware pcmcia package, and had to do no modifications at all, except for IP-setup in /etc/pcmcia/network.opts. The card is detected and initialised at boot time or when inserted, and the card is correctly disabled when removed.
I have a Delkin Devices SmartMedia Adapter for reading the SSFDC cards from my digital camera. It acts as a removable IDE disk, so I had to configure the kernel with support for removable IDE disks and recompile the pcmcia tools. This might already have been done for other distributions (I use an ever more molested Slackware).

Most Echos models come with a CD-Rom drive. Mine is a TEAC drive. It is interchangeable with the floppy-drive, but only with the machine turned off. Hotswapping isn’t possible. To use both at the same time, connect the floppy drive to the parallel port as described above.
Linux should be configured with support for IDE/ATAPI CD drives.

I have no experience with these. Nobody have ever written to about it, so …

I have found these pages very useful in my work with the Olivetti Echos laptop:

This page has benefited from the experiences of several Linux/Echos users, too many to mentionhere. Thanks for all the feedback and information..

I find this document lacking in at least these areas: