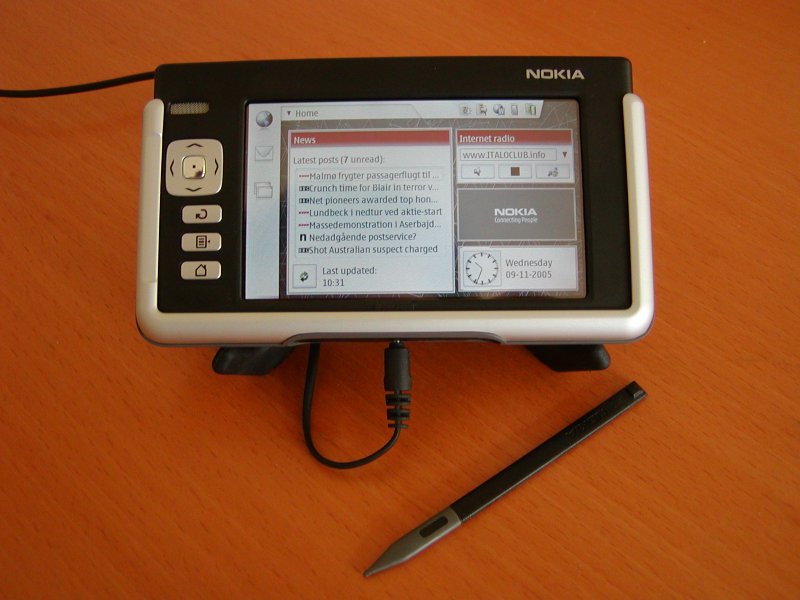 My Nokia 770 finally arrived. lts the first time l experience Linux as a consumer product, even though l’ve been using Linux as my primary OS since 1992. The sensation is quite strange.
My first impression is: WoW!!
The display is incredible. Though rather small, only about 4″ it is 800 pixels wide and very clear. Text can be small but there is no flicker.
Text input is by an online keyboard or by handwriting. As a matter of fact l’m writing this on the 770 using the handwriting recognition. lt is a weird way of typing, but you can get used to it. Be careful to write clear and distinct characters.
The first time l turned it on it searched for my mobile phone which it located without problems. Next it found my wifi-network, again all by itself. lt could hardly be easier.
lt was on the network in a few seconds.

Applications
The Nokia 770 has several applications and many more can be installed by the user.
The start screen has little windows with the most recent news titles, an interface for playing internet radio, a short cut for the web browser and an onscreen clock.
The web browser is a version of Opera. It is good. I still haven’t seen it render something in an unacceptable fashion, but it is a bit memory hungry. When too many applications are open at the same time, sometimes browser windows will just disappear.
The mail program supports multiple accounts, both pop3 and imap, but all mail is shown in a single inbox. I spent quite some time trying to figure out how to switch to the other mail account, before I discovered that the mails from the two accounts were shown mixed.
Viewing a mail message can be slow, but html mail is handled well. 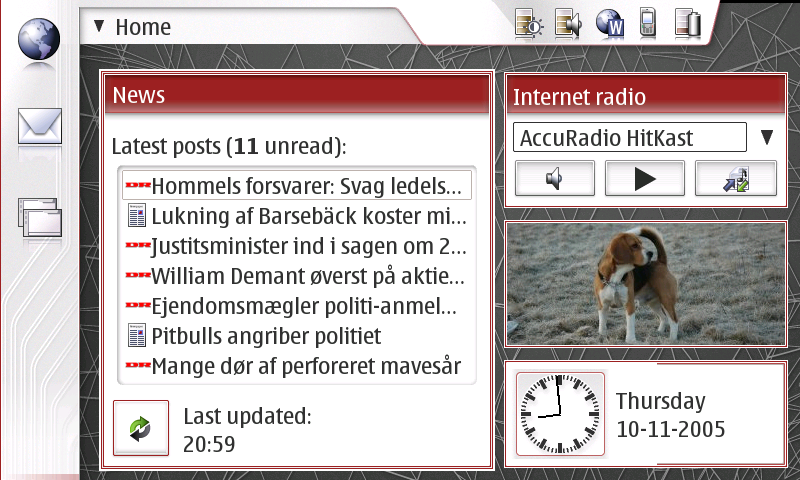 The news reader is for reading RSS feeds, and that too works well. There is no way to enter a new RSS feed directly from the browser. You have to copy the link by keeping the stylus down on the link of the RSS feed until a menu appears where you can “Copy link to clipboard”. You then have to switch to the news reader and paste that address as a new feed.
The audio player can plays several formats, including MP3, and also streaming audio. It doesn’t support windows media, so many radio stations are off limits. You can find a lot of compatible radio stations at Shoutcast.com.
The video player is great, but it will often complain that an input is of unknown format. It appears it needs a fairly low framerate (about 15fps) and a rather low resolution. It is probably due to the rather limited cpu resources available for scaling and adjusting on the fly. Anyway, there is a useful instruction at maemo.org about how to re-encode videos to they’ll play on the Nokia 770.
For some reason I cannot get the video player to play a video from the net. It wants to download it first, which is problematic since the system has little storage capacity unless you buy a 512Mb or 1Gb RS-MMC card.
There’s also a PDF reader, a small notepad like editor and a simple drawing program, together with a calculator and a simple file manager with an image viewer.
You can install other applications easily. There are many applications listed in the Application Catalog at maemo.org. I have installed Gaim for instant messaging, XChat for IRC and an Xterm for exploring the system.
Grievances
Not everything is great.
More memory wouldn’t hurt. The device has 64Mb but a browser instance can easily take 16Mb. Start the browser and the video player and you’ll have memory problems immediately. The system becomes very sluggish under load, with very little feedback on whats it doing, or whether it is doing anything at all. It is generally best to close down applications as soon as you’re done with them, and not just let them hang around for later.
The mail program doesn’t keep track of separat mail accounts. All mails appear in the same inbox, and your IMAP folders aren’t downloaded and shown. It is very handy to be able to read your mail anywhere, but the application is a bit simplistic. It does, however, remember which mailbox each mail belongs to, and does the right thing when you answer a message.
In both mail and browser it is possible to scroll the content by dragging the stylus over the window. It can be quite handy, but in the news reader the same behaviour selects the text. Somehow the News reader seens less integrated in the system.
Also, in the news reader, the text from the feeds isn’t formatted properly, it is simply flowed with markup removed. It is not good enough for feeds that carry the entire article in the feed. It should at least respect paragraph separation and simple things like bold, italics, quotes etc.
There is no way to make screendumps!