Watching movies on the Nokia 770

I’ve been playing with video on the Nokia 770 lately, based on the information at maemo.org.

I have a movie in two parts, which I re-encoded with this function (arguments are input and output files):

The result was a 314 Mb file with a little less then two hours worth of video. 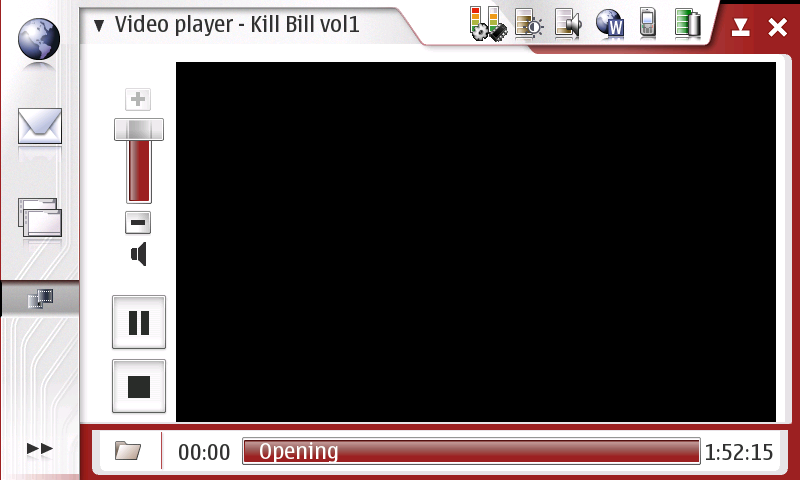 I copied the movie to the MMC card using an usb2 card reader since the Nokia 770 seems to work at usb 1.1 speeds.
I launched the movie by openeing the video player on a freshly rebooted tablet and opening the movie from within the player. No other applications had been opened, and the tablet was not on the network.
Yet it just sat there, saying “Opening” at the bottom of the display, for solid 10 minutes.
Not only that, after about 45 minutes the tablet crashed and I had to wait another ten minutes for it to restart the video.
Well, that was last night. Today I tried various video files, all encoded with the same command shown above. In no case did the “Opening” period last more than about 45 seconds, and it seems it is generally proportional with the length of the movie. A movie of 1:52 hours opened in 45 seconds, a one hour movie in 25 seconds and a half hour show in 10-15 seconds. That is acceptable. I don’t expect a tiny computer like the tablet to open a large file instantaneously, but 10 minutes is not acceptable.
The only difference I can think of is that fact that the problematic movie is stitched together from two different files. I guess the test of that is to stitch together two very short movies and see if that also causes the file to load very slowly.
Anyway, I believe I have a good grasp at adapting video files to the Nokia 770 tablet. It is not that difficult, but you need a decent computer for doing the encoding, as it does take some ressources.
So, I’m off to watch Red Dwarf now. See you.

One response to “Watching movies on the Nokia 770”