Yesterday I had my first real lesson in Voga alla Veneta, the Venetian style of rowing standing up. I went out with Lino, one of the coaches at the Canottieri Diadora on the Lido di Venezia, in a mascareta like the other two times I have tried it.

The first two times I’ve tried to row Venetian style, together with Enzo, I was always in the front position, a prua, and I automatically went there again, but Lino sent me to the stern, a poppa.

The stern position is more difficult because the rower a poppa is in charge of steering, and therefore has to know various maneouvres to turn left and right, do sideways movement, turn on the spot and much more.

Before we started, Lino changed and adjusted my forcola. Now, if anybody suffered from the belief that the forcola is just a piece of wood to hold the oar in place, they’re wrong. Adjusting a forcola is a fine art. The lower part of it doesn’t just fit into the holes on the side board of the boat. The holes are too large, and wedges had to be hammered in to keep the forcola in the desired position while rowing. By placing the wedges differently, the forcola can be made to lean outwards or inwards, forwards or backwards, and be placed at different heights. I can’t remember all the details, the explanation came rather fast in Venetian dialect, but outwards leaning gives better control but less speed, inwards leaning less control but more speed. Forward leaning was for racing. Being a beginner mine was outwards leaning, and rather high, as I’m taller than most of the locals.

We started rowing in two, but fairly soon Lino just sat down watching me. He corrected a lot of little details of how I stood in the boat, how I shifted weight back and forth and how I held the oar. This was more or less what I had expected, as Enzo had asked Lino to teach me the correct position for rowing Venetian.

However, without Lino rowing on the left side of the boat, with me rowing alone on the right side of the boat, we started going in circles. Its like doing only sweep strokes on one side in a kayak. There was a bit of wind, and like a kayak the mascareta wants to turn into the wind, Ã¡nd with the two things combined there was very little control of where the boat wanted to go.

Lino then started to teach me a return stroke used by the gondolieri to keep the boat on course. I believe it is called a stagare, or stalÃ¬r, and it turns the boat to the right, but it is made as the blade returns after a forward stroke. At first I didn’t understand what the stroke was supposed to do, and consequently I performed miserably, but as understanding grew it got better, and after a while I could, with a lot of concentration and quite a few cases of dropping the oar from the forcola, mostly control the direction we were going.

The stroke he taught me is rather hard to describe. On a normal forward stroke you put the blade in the water in a vertical angle, the lean on the oar, turn your wrists and the end of the stroke, and when moving your weight back on the back foot, the oar returns forwards with the blade parallel to the water, either out of the water or sliding through at the surface. A forward stroke with no correction will send the boat turning left in a small circle, and in fact it is not called a forwards stroke in Venetian, it is called a premere, pushing.

The stroke to keep the boat going straight or even right, is made on the return movement, which is inactive in the simple forward stroke. Instead of turning the blade parallel with the surface on the return, it is turned a little bit more, so it bites into the water, while applying a downwards pressure on the oar handle with the left hand. It works a bit like a rudder but with the oar more horizontal than vertical. It has to be made very delicately to work. The angle of the blade, the pressure on the handle and the return movement of the blade has to be precisely coordinated and carefully measured, or the oar will drop from the forcola. The forcola gives a firm base for a forwards stroke, but when applying pressure on the return there is only a tiny little tap to keep the oar from dropping out, so the downwards pressure is all important and has to counter the downwards movement of the blade in the water precisely.

It took me at least half an hour of deep concentration and many mistakes to get some kind of grasp on it, but at the end it was a great sensation getting the feeling of controlling the boat, even with this very alien style of rowing. Just as I started to feed I had it, my performance declined, the boat veered and I kept dropping the oar. In my eagerness and concentration I had forgot time, and I had been rowing for at least 45 minutes alone and I was very tired. After maybe an hour on the water, we rowed to boat back in unison, which was suddenly so incredibly easy compared to rowing the boat alone.

When I jumped on the bridge back at the club, my legs shook under me. I was that tired.

I’ll be hanging around Venice for at least another week, so there should be time to do a few more lessions of Voga alla Veneta. For now, I have an appointment on monday morning, still with Lino. 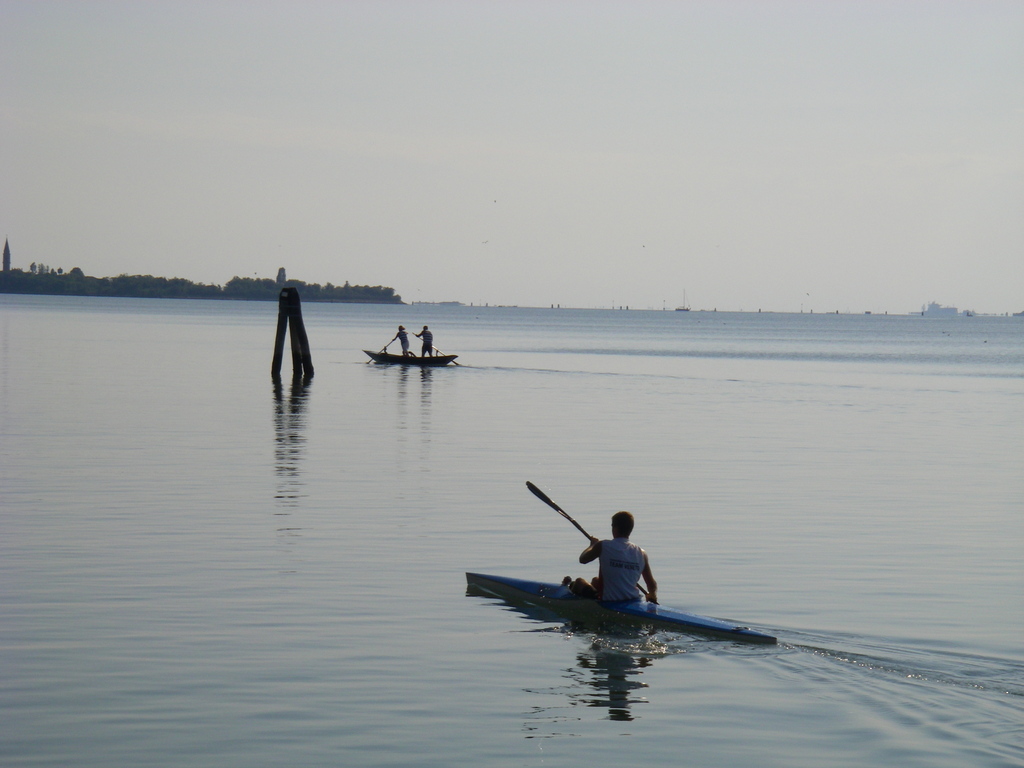 Rowing in the Arsenale