My little voga alla veneta adventure continues, at a slow but accelerating pace. I haven’t had a chance to try it again as work paddling around Venice with tourists have taken almost all my time, but today Enzo gave me a call and asked if I wanted to try again today. I threw down a quick lunch, way to quick to be decent here in Italy, jumped on my motorbike and sped down the Lido to the “Canottieri Diadora” where Enzo rows.

I arrived at the club just as Enzo was coming back in with another newbie. He jumped out of the mascareta and I jumped in, and off we went. 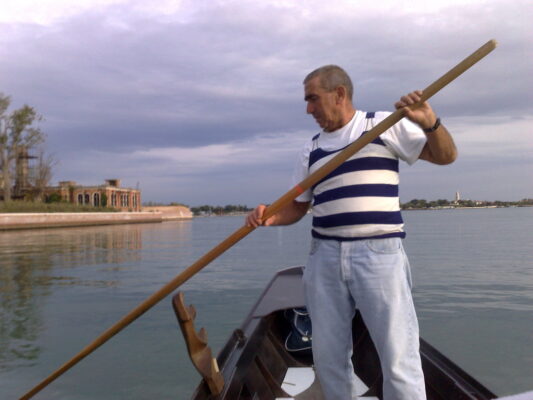 Even though I have only tried it once before, the basics I learned last time returned immediately: the position of the feet, the hold on the oar and the twisting movement of the wrist to release it from the water without dropping it from the forcola.

We rowed south towards the little island of Poveglia, which I passed only a week ago with a group of Danish paddlers. Poveglia has a past as a lazzareto, which is a place where ship crews were put in quarantine if decease was suspected aboard, and the ruins of the hospital is still there, though in a rather poor state. 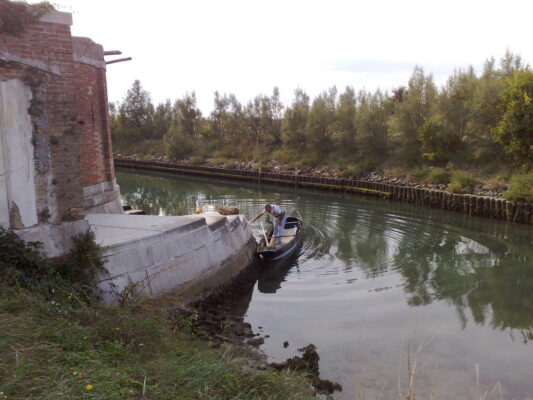 Poveglia is cut in two by a small canal, and we stopped there to have a look. Most of the buildings are overgrown, and bits and pieces of hospital equipment are still lying around under the vegetation, though anything of value has been taken away ages ago.

On the other side of Poveglia we met Angelo, also from Canottieri Diadora, obviously having a break, sitting down on his mascareta. After a short chat he agreed to join us on the return trip, but since he was rowing alla valesana, with two oars crossed, he was faster than us. My lack of rowing skills might also have been a factor 🙂 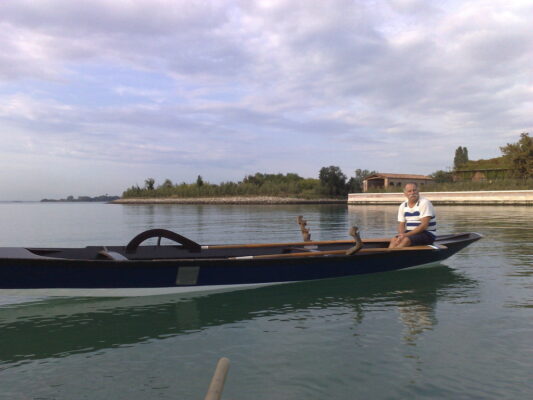 The whole process of rowing standing is working better now, shifting balance from one foot to the other, as the weight is used to push the oar through the water, coordinated with arms and wrists to control the entry, passage and release of the blade from the water. Naturally, I still drop the oar from the forcola regularly, but I did manage to do some decent stretches with a decent efficiency without looking completely silly all the time.

Back the the club we took the boat out of the water, using an electric crane, and washed it well.

Shortly after, one of the club’s instructors came in, and he gave me an appointment for tomorrow morning at 8.30 for a proper lesson in voga alla veneta.

Now I only need to learn the dialect and buy a pair of flashy sunglasses, and I will be absolutely indistinguishable from the natives 🙂