I recently found some scanned books from Venice of times past. One of them is a kind of historical encyclopedia from the mid 19th century, and I must say it has its little oddities 🙂

The entry for Malamocco – a small hamlet on the Lido di Venezia with a glorious past – reads:

Malamocco, Matemauco, Metemaucum. City which flourished in the first times of the Venetian society, located near the harbour, where the Madoacus, or Brenta (from where, perhaps, the name Matemauco) entered the sea. It was the capital on the Venetians, and seat of their doges (these had already abandoned Eraclea, or Eraclia) until the year 813 circa; it also had nine bishops, the last of whom were one Stefano Badoaro (see Bishops of Malamocco). By earthquake, or by horrible storm from the sea, it was destroyed between 1100 and 1102, and now nothing remains but well kept orchards and a poor hamlet. There, fleeing Austrian bullets (see san Giuliano del buon albergo), hunger, anarchy and the many other calamities that afflicted the illustrious and unfortunate Venice, in a few hours, by cholera, on the twentyfirst day of August of the year 1849, passed away serenely, because supremely pious, the woman of who writes. O reader, it will not hurt you to say a prayer for the peace of her soul. 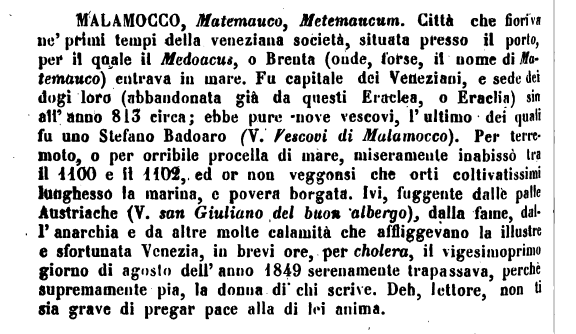