Launching from a beach

For almost four years I’ve been doing my kayaking tours of Venice from a camp site on the Lido di Venezia.

It has been, and is, in many ways a good launch spot close to Venice, but it is not without its drawbacks. 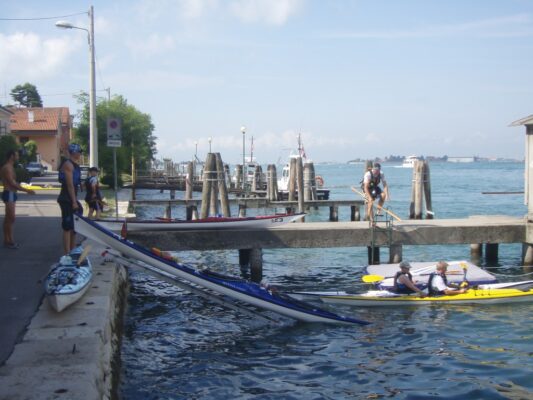 The shore there is a road which is 1-2m over the water level, depending on the tide, so we launch one at a time from an inflatable platform.

For many of our your guests it has been an almost intimidating experience. One of the busiest shipping lanes in the lagoon passes just in front of the place, and the waves from each passing boat rebounds from wall causing the platform to bounce up and down.

Even if the waves are at most 1-2ft, they rebound and intersect, making it look violent and dangerous for the inexperienced holiday paddlers that often come for our tours. I’ve seen many scared face there in the last four years.

It isn’t really dangerous, but it looks so, and often perception is just as important as reality.

What can at times pose a risk is the 2 knot tidal current in from of the place, which can easily cause people to drift away before we have the last of the group on the water.

Once everybody is in the boats it is necessary to cross the shipping lane immediately, heading for the calmer waters across the canal. This too can be intimidating for inexperienced paddlers.

For the last month or so I have done the tours from a beach on the island of Certosa, just on front of the old launch spot. We can easily see the 500m across, but it couldn’t be more different. 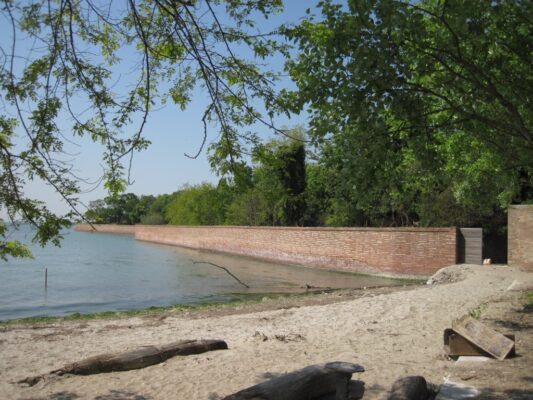 Its a shallow beach on those calmer waters we head immediately for from the other side.

Launching from a beach like that does have its advantages.

There is practically no fear factor. Little could be and feel safer than a beach without waves.

Launching is so much faster when you can line the boats up on the beach and send them off simultaneously or in very fast succession. Likewise, getting people in, out of the boats and the boats back in storage is way faster too.

The passage from the beach to the first stretch of open water is a canal following the shoreline of the island, separated from the shipping lane by sand banks where most waves break. The area in front of the beach is therefore very sheltered and safe, so there’s little problem in launching ten beginners before I myself get in the boat. 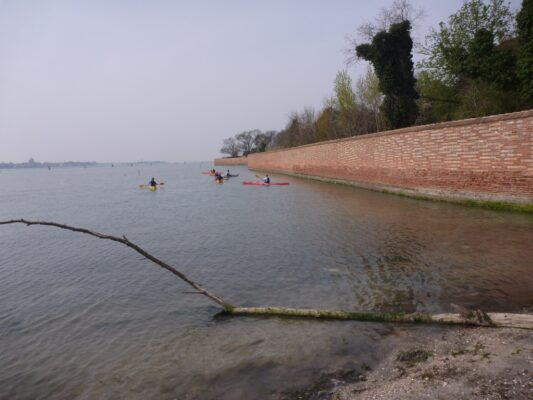 There are some disadvantages too.

When people feel safer they also act more by their own accord. It is not necessarily a bad thing, but it makes it a lot harder keeping a check on what is going on. It is, for example, more likely that somebody very eager will just set off, without lifejacket or spraydeck.

Also gear and persons tend to get quite a bit more dirty when launching from a beach full of sand, mud and algae.

The water is very shallow at times, and if people don’t land in the right spot they can run aground rather far from the beach, and if the land on the wrong part and step out, they’ll be in the mud to their knees.

In any case, the minuses are minor and nothing more that can be handled with a bit of well placed instructions.

I still don’t know where operations will be for the rest of the season. Nothing has been decided yet.

2 responses to “Launching from a beach”