Venice Kayak doesn’t really do many tours in the winter, but we’ve had a few in the last few weeks.

Yesterday’s paddle was on a foggy day, postponed from the day before which was even foggier, so we ended up doing a rather different tour as we couldn’t do some of the open water passages that we otherwise do.

January 6th, Epiphany, is called the Befana here. She’s an old witch who’ll bring gifts to the good children and charcoal to the naughty ones. We spotted her flying over Rio San Giuseppe. 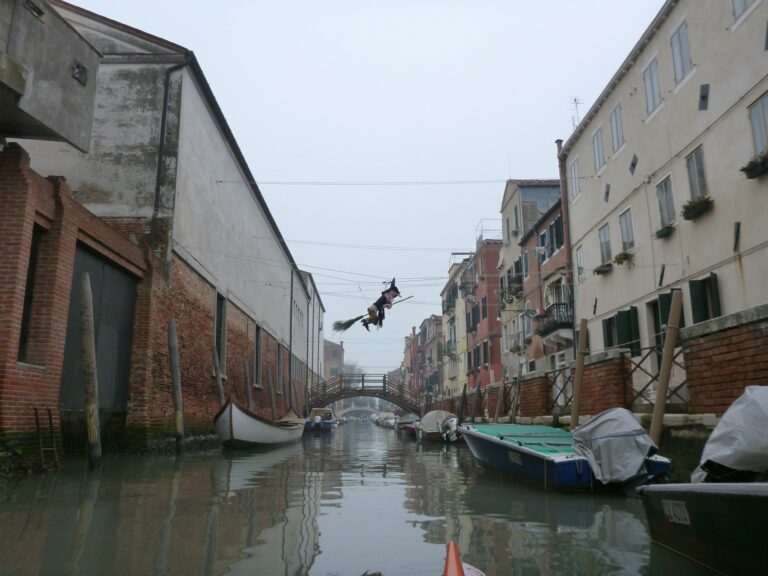 Here we’re in the Bacino San Marco, with the island San Giorgio Maggiore in the background to the left, and you can just glimpse San Marco and the campanile in front of the kayaks. Rio dei Greci boasts one the leaning towers of Venice. We hardly ever go there as the canal is badly infested by taxis, but there were few yesterday. 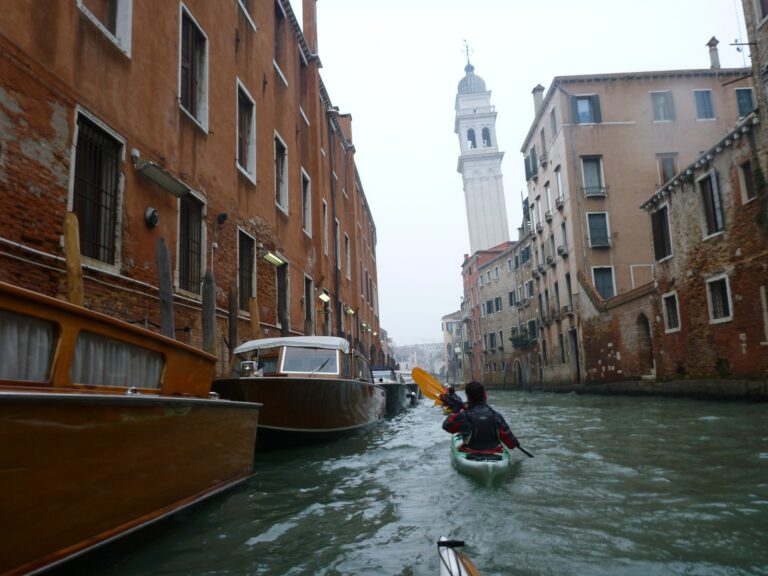 The Rio della Canonica, or the Rio di Palazzo, which is just behind the Palazzo Ducale, usually suffers from gondola congestion, but that too was rather quiet yesterday, so we had a chance to paddle under the Bridge of Sighs and even get a few photos. Our guide Loretta never loses an opportunity to race a gondola in front of San Marco. I don’t race much. I’m too slow, so I just enjoy the view. And the Madonna della Salute (there’s supposed to be 1,1 mio tree trunks underneath the foundations). Here we’re further up the Canal Grande, at the beautiful gothic Palazzo Bernardo from the 15th century. And in the narrow Rio della Madoneta. There was very little traffic in the city, so we only met the occasional gondola on the tour. Passing under the low bridge in front of the monumental entrance to the Arsenale (the ancient Venetian navy docks) is always good fun, but the tide was rather low. Loretta made it too. The Rio de l’Arsenal is always good a few photos. They sure knew how to make monuments back in those days. Our guide Loretta kept creeping up in front of the camera. And again. Here entering the Bacino San Marco, still with a good deal of fog. We continued around the Arsenale with its imposing walls. Close to the eastern end of the Arsenale there’s an old altar in the wall. The church of San Pietro di Castello is the former cathedral of Venice, with the old residence of the patriarch to the right. Here too is one of the learning towers of Venice. While we cannot enter the Arsenale from the monumental gate, it is easy to paddle in from the Porta da mar, the gate to the sea, with the huge old mast crane. The area here is the darsena grande and its where the Serenissima build and maintained the navy the ruled the eastern Mediterranean for centuries. The galleandre are covered areas where they could work on the innards of the ships once the hull was floating but for the rigging was mounted. The tese were covered areas used for laying up the keel and building the hulls of the ships. Now most are used by companies taking part in the building of the flood gates which should protect the city from excessive flooding (but not from rampant corruption). Along the sides of the Arsenale you can still see the rings used to mooring the ships during the different phases of construction. Leaving the Arsenale through the gate to the sea. Our base on the Certosa island is under the fog just in front of the paddlers.