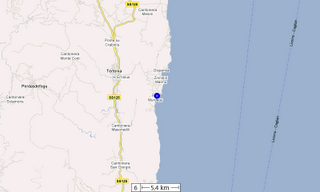 We had a nice day on the water today. We started in great style with an hours break after an hours paddling, but after that we paddled for five and a half hours almost without break.

Initially we had it easy. Tailing swells of 1-2m and a pleasant tailwind gave us good speed, but in the middle of the Cala de Murtas the wind changed suddenly from S to W, probably funneled by the mountains. We then had swells from SE and waves from W which was new to me. It caused some interesting wave patterns. Just as we came across the bay for a cherished break, the wind turned to N and the rest of the day was double work at half speed.

We didn’t get as far as we wanted before it got close to sunset and we had to search for a landing spot. We ended up in Melisenda, some 30 km south of Arbatax.

As we started to set up camp and preparing some serious camping cooking, we discovered that our cooking alcohol wasn’t there. I had taken it out of the hatch the evening before and left it beside my kayak, but during the night the sea had eaten away at the brink, and the bottle was gone. The kayaks almost went the same way, as the sea had dug away under them too.

In any case, we were sitting on a beach with food but no gas or alcohol for camping stove. Hunger can drive even the sanest person to extremes, and we walked out into the darkness, dressed only in headlamps (almost) in search of a place to eat. After having scared an elderly lady in a house out of her wits, we got some instructions on how to find the local pizzeria.

Apparently destiny will have it that we paddle from pizza to pizza. It is somewhat of consolation that the pizzas here are very good. One in our little group uses stronger words, though.