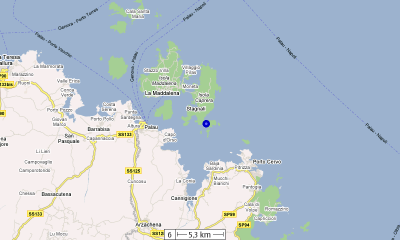 If there is on theme to today it must be the many types of weird waves we’ve met. We started from Cala Morescoe near Golfo Aranci and headed straight into some extremely choppy waters off Capo Figaro. Waves apparently came in from two different directions and bounced off the vertical rocks, giving us quite a ride.

From Capo Morescoe we crossed north towards Piccolo Romanizzo, passing Isola Moratio on the way. We had a very brief stop there, but there was no bar and no reason to linger.

The next stop on our path was Porto Cervo. We had been told on many occasions that there was a fantastic marina there with everything we could possibly need. We had another very choppy ride up to and into Porto Cervo. We landed on a beach just besides the marina, which was full of some very expensive looking boats. We packed up everything we needed for a good and sorely need shower and some laundry, hopefully topped by some delicious food and good coffee.

As we walked towards the marina everything looked very quiet and dull. A huge building was full of closed and boarded up shops, and the only open door we could finf led to a very closed restaurant, with tables stacked and chairs covered for storage. We continued and at last we found an open place. It was a very fancy cocktail bar, and very empty, but we got something to drink and a couple of sandwiches which surely suffered from severe identity crises.

We were low on water, the cocktail bar only had one liter glass bottles and the marina supermarket wouldn’t open for another two hours. We decided to paddle on, doing our shopping elsewhere, but on our way out we did manage to find a bar that could sell us some reasonably sized bottles of water.

From Porto Cervo we headed for Isola Caprera. Again we were in for an agitated ride. We had 1m waves coming in from NE and E so we were tossed here and there most of the time. We got some nice tailing waves as we turned west towards Caprera, but we continuously got splashed and pushed by the sideways waves.

Things became a bit easier when we turned west at Isola delle Bisce, since we got some following waves to play with, but we were still tosse hither and thither most of time, including our way into the bay north of Punta Rossa on Isola Caprera, where we set up camp on a secluded beach. 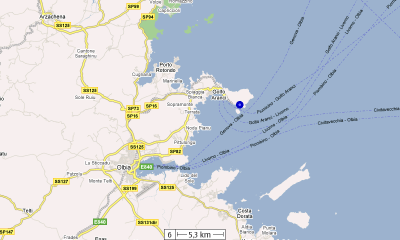