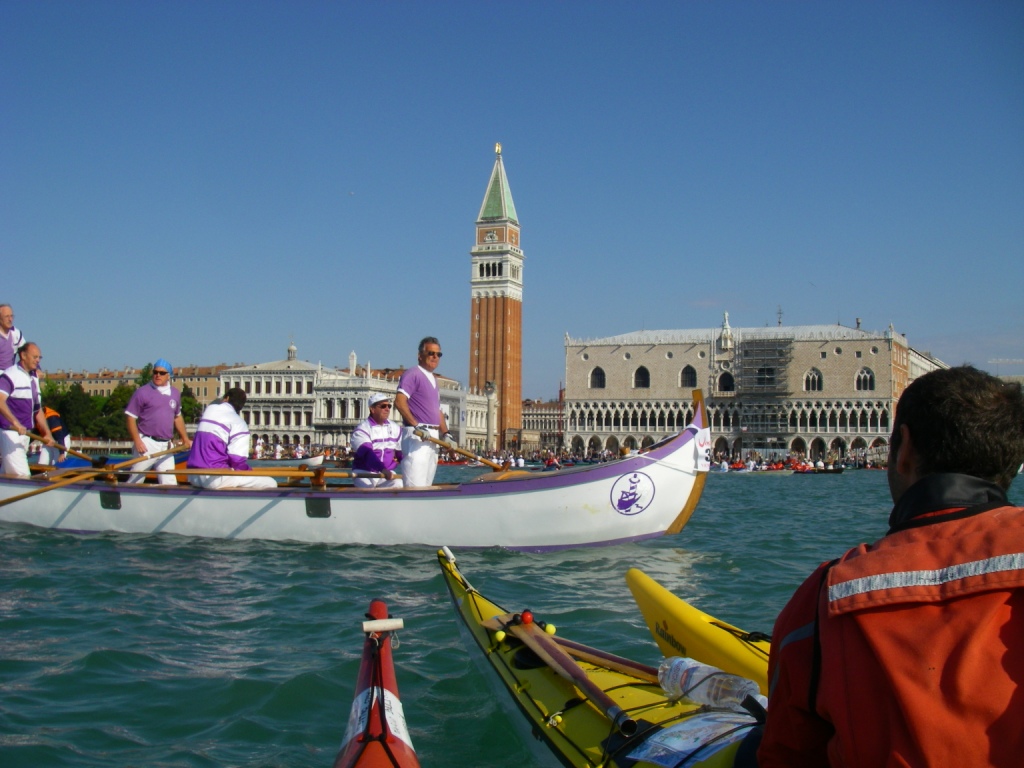 Sunday was Vogalonga Day and all of Venice was turned upside down for a day.

The Vogalonga is a celebration of Venice and its rowing traditions, and in part also a protest against the invasion of the city by motorised vessels. The waves made by motorboats and ferries are very harmful to both city and lagoon.

There must have been close to 1600 boats this year, a bit more than last year. The highest number I saw was 1566. On top of the registered boats there are all those who just come along—like my friend Marco who has done it so many times he doesn’t care about the diploma anymore—so the total number of participating boats could be anything from 1600 to 2000. The number of persons participating must be many times higher, as a lot of boats had a crew of more than one.

Most of the locals row traditional boats. Many are from the various rowing associations, but there are a lot of private boats too. There were many gondolas, of course, but I think the most popular type must be the sandalo, and the smaller sandalino. The sandalo is a very elegant boat, long and slender with much less rocker than a gondola. Besides these I saw Mascherete, Topi, Tope and a huge Peata.

Personally I must have been one of the slowest of the many participants. I came in just minutes before the closed the finishing line down.

We started from the Camping San NicolÃ² on the Lido. I was up at 6.30 to get everything ready, so we could be in St. Mark’s Basin at 8.30. It’s only a 30 minutes paddle, but there are always things to do, and we had a group of some 12-14 persons to get on the water. Our launching conditions at the camping aren’t finished yet, and the very low tide caused a bit of problems, but we found various corners and ramps to launch from.

We paddled to St. Mark’s Basin in a loose group and soon got separated in the confusion. I followed Marco in the hope of getting to meet some of his Italian paddling friends, and we did meet up with Giorgio Sartori who is organising the Bibione Kayak Symposium in these days, some 70km north of Venice. Giorgio was in good company, with Nigel Foster, Kerstin Nelson and Jen Kleck.

I quickly lost track of where Marco went, and instead I paddled with Giorgio, Nigel, Kerstin and Jen for most of the first half of the Vogalonga. We paddled with the main group, and it was quite a spectacle with a plethora of different boats.

A beautiful blu-white Topa which had been built by hand by the crew themselves.

A vintage sandalino, made in 1968, rowed “alla valesiana” with two oars crossed.

A Peata, an old type of cargo boat.

This is by far the most beautiful boat I saw all day. A beautiful sandalo with a beautiful crew in beautiful clothes, they did draw both attention and camera lenses.

Burano is a fascinating place, so we stopped there to have a look at the city with all the coloured houses, and there suddenly, Marco showed up again, with a couple of girls, naturally. To show off I guess, he started crawling around on the kayaks. The water in that canal is absolutely disgusting, so I had my camera ready should he end in the water, but alas, nothing happened.

We had a nice break there for a bit of sightseeing and a coffee. We continued, now way behind the main group of boats. I chatted with Marco for a while, and lost contact with Jen, Nigel and Kristin there. I tried to catch up with them on the stretch from Mazzorba to Murano, but only managed to work up a sweat. When I got to Canal Grande in Murano they were nowhere to be seen.

There were very few boats out in the lagoon at this point, so I knew I was quite a bit behind the majority of the boats, so it was quite a surprise to find the Cannaregio canal totally and utterly crowded. I had seen on the description of the route that the Ponte Tre Archi was a known congestion point, but didn’t really expect any congestion being so late.

Most of the trafic jam was caused by backwards rowers, English style rowing they call it here. There was quite a bit of current in the canal, so when the long boats tried to negotiate the narrow bridge arch they easily got turned sideways blocking the bridge. I moved forward to the bridge just as two backwards boats tried to do the same, and got squeezed between the oars of the two. It was a bit like being stuck between two giant combs with moving teeth. I got out of the problem by pulling myself close to one of the boats under their oars, so the other could get through first, then I followed before the second backwards boat.

Just behind the Ponte Tre Archi I found Jen Kleck, clinging on to a parked motorboat, looking like a lost puppy. In the mess before the bridge she had gotten separated from Nigel and Kristin, and didn’t know whether they were ahead or behind. We paddled together down the Cannaregio to the Canal Grande towards the finishing line.

As we neared the finishing line, Jen wanted to see a bit of the smaller canals, so we made a short detour down the Rio della Toletta, Rio del Malpaga, Rio del’Avogario to the Squero Tramontin and along the Rio dei Ognisanti to the Rio di San Trovaso and back to the Canal Grande.

It was a pretty detour, but we lost more time, and as we finally came back to the St. Mark’s basin the loudspeakers went “and thanks to all our sponsors for their support …”, and I was quite sure we’d managed to be too late my a split second, but as we passed the finishing line we got out little diploma and medal.

We ran into Marco again there, sitting in his kayak behind a couple of wooden poles, chatting to somebody on his mobile phone. Jen was quickly reacquiring her lost puppy look, so Marco rang Giorgio to find out where the others were. They were already at the car near the barrier, and after a bit of discussion of routes and canals, it was decided that Marco and I would escort Jen back there through the city.

Once Jen was back in safety, we paddled back to the Lido north of the city, to avoid all the confusion and have a bit of quiet around us for a change. At least I was rather tired. The approximately 30km of the Vogalonga had turned into 40-45km in all, and I really wanted to stand up and stretch my legs.

Just as we were about getting the kayaks up, meeting the others, and I started to think about showers and sleeping bags, Marco threw another bomb. It was suddenly his birthday too, so we all had to go out and eat together. Bye bye sleeping bag. Nevertheless, we had a nice evening at the pizzeria “Alla Botte” in Gran Viale on the Lido, but I was practically sleep walking back to the camping afterwards.

Bonnie, its only a plane ticket away. You’ve got to come one day, you can’t stay over the ocean forever 🙂

[…] now have in Sardinia, all those I know from last year, from our visit in Easter this year, from the Vogalonga in Venice, and from the symposium recently in Bibione here in the Veneto […]