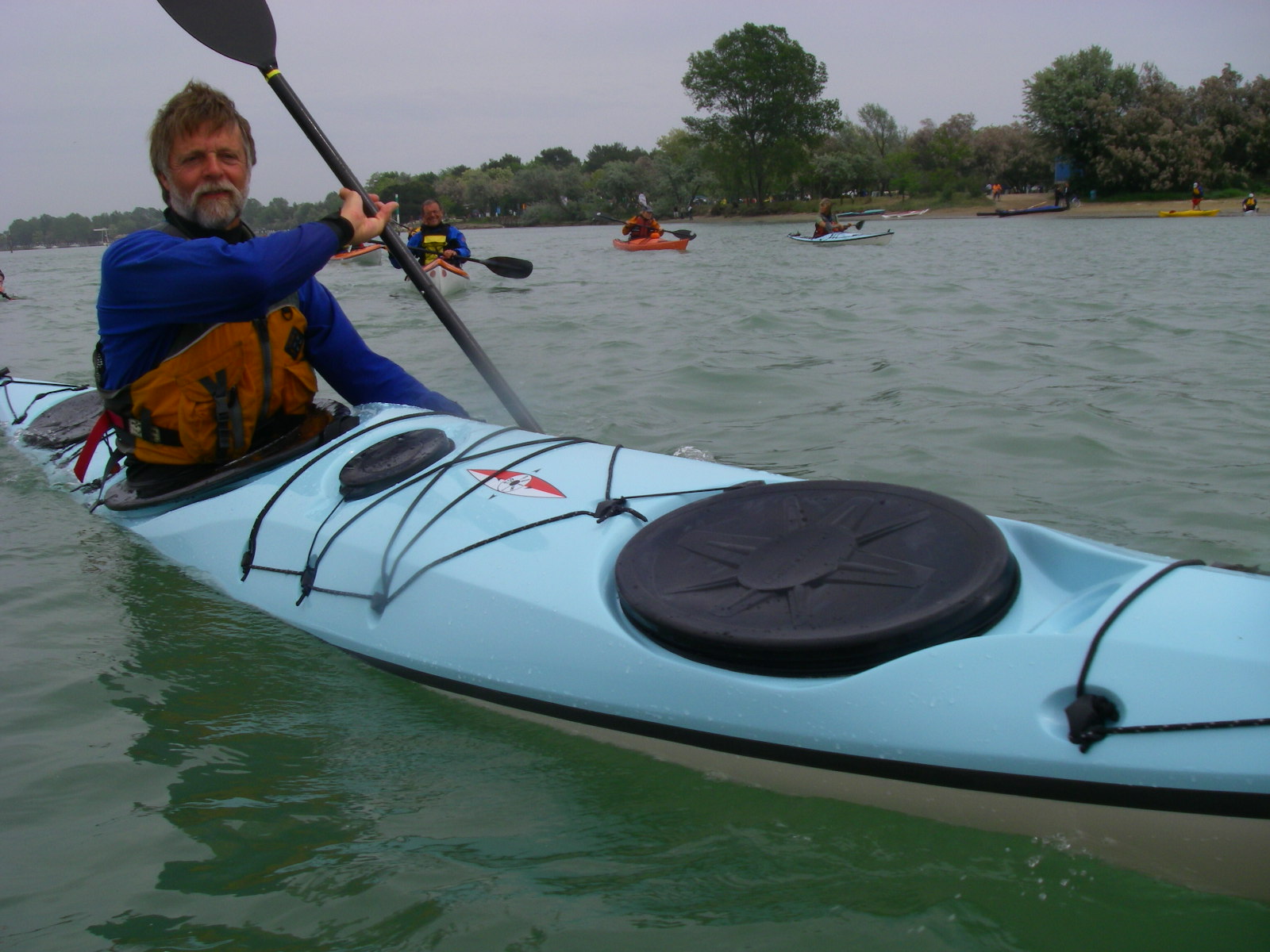 It has been a busy weekend here at the Bibione Kayak Symposium, as it should be.

Expecting a rush on Saturday, I signed up for classes on Friday, so I was out of the way of the way for the weekend. Morning class was with Jen Kleck, for rolling exercises. Jen is an absolutely marvellous teacher and taught a couple of girls to roll in almost no time. I hadn’t done any rolling practice for ages, but the roll was still there, both on- and offside.

We were joined by Gaudenzio Coltelli from Sea Kayak Italy on the island of Elba. Gaudenzio is an experienced Italian coach, who has taught here for ages. He was with us to see Jen in action, but he ended up practising sculling with me, a technique I haven’t quite managed properly before. It is amazing how easy a difficult thing can be once you have a good teacher.

In the afternoon of Friday I had signed up for a class with Nigel and Kristin. First we paddled from the local lagoon to the Adriatic to look at waved. Standing on a sand bank, drawing in the wet sand, Nigel explained about waves and how they behave and break around obstacles. He then explained about surfing, and we returned to our boats to try it out in practise. Coming from a somewhat wave inhibited place, I have had no prior experience surfing, but it was amazingly easy to get going. It took several tries to learn to catch the waves and to brace and steer properly, but it was great fun and I learned loads.

We then moved back into the lagoon for the second part of the class. I’ve done classes with Nigel before, and his incredible repetoire of techniques and stunts never cease to surprise me. First we played sailing, by forming a platform of all the kayaks and the standing up to let the wind drive us along as a human sail on a raft.

Then we practiced efficient steering in windy conditions, using edging in combination with bow and stern rudders to get the wind to do part of the work. There seems to be some written or unwritten rule that every Nigel Foster class has to end with everybody going around in little circles.

In the evening after dinner Italian paddler Dario Agostini made a presentation about his 2003 journey down the Danube river, from St. Moritz in Switzerland to Istanbul in Turkey, an 80 day journey of almost 4000km.

Saturday became the big Point 65Â° N day. Sandro Spagnol from CS Canoe, the Italian distributor of Point 65, arrived with some of our new boats for Venice Kayak. We had ordered a Sea Cruiser, an XP, an X-Lite, and most importantly, a Whiskey 16, the latest of Nigel Foster’s designs. I’m almost certain our Whiskey 16 is the first and for now only one here in Italy.

Nigel got a bit emotional, it seemed, and held that afternoon’s classes using it while I took some photos. What Nigel can do in a kayak is already impressive, but watching him do it in a boat which is specifically designed to do well what he does well, is mind boggling. He could do a ballet in kayak if it were set to music.

After dinner that evening Karen Darke told of her journey in kayak up the coast of Vancouver Island to Alaska. It was an impressive journey, and it didn’t become less impressive knowing that Karen is confined to a wheel chair due to spinal injury after a fall while rock climbing.

Accidents can happen at any time, causing injury or death, or ending us where fate put Karen, in a wheel chair. It doesn’t really take much, and we’ve probably all had some close encounters with destiny, but shaking them off afterwards, preferring not to think about what the consequences of what we just avoided could have been.

Yet we go and play with danger, by paddling in remote and dangerous places, by roaming half of Europe on motorcycle, or like Karen, by climbing rock walls, and we do it for no other reason than to do it, to see if we can, to play with danger.

Its been raining all night, and the symposium is slowly grinding to a stop. There are still some classes this afternoon, but most exhibitors have packed up and are heading home, many participants have done the same.

We’re still around, in part because there are many who wants to try the Point 65Â° Whiskey 16. I’ve already packed up all my gear and I am just waiting to take the tent down, hoping for a few rays of sunshine to dry it just a little bit.

Most of the participants of the symposium have been Italian, so it hasn’t really been all that international. For me this has been great, because it has given me ample opportunity to get to know many of the Italian paddlers, coaches and producers.

All in all I’m very content that I’ve come here.