Franceso and i had planned to paddle to Cala Goloritzé in the Golfo di Orosei yesterday, and we got up early and set off fetching kayaks at a local camping where Francesco keeps par of his gear, and then on the road to Santa Maria Navarrese.

We launched in calm weather, a force 2 scirocco (SE) and some following waves and swells, but with a forecast of up to force 4 during the afternoon.

The paddle northwards went easy enough, and we passed Pedra Longa and the Grotta della Columba without problems, but as we approached Capo Monte Santu the going got a bit rougher. The Capo Monte Santu is cape with a 200m vertical rock wall that drops straight into the sea for some 2-3km, and there are almost always difficult winds and waves there.

We had a bit of a fight with waves and winds around the cape. Personally I find following swells and waves quite difficult to navigate, as I have no visual forewarning of what is in arrival, but I think both of us found it a bit difficult there, as Francesco headed directly for the entrance to Porto Quao, which is a completely sheltered natural harbour on an otherwise not very welcoming coast.

We landed in Porto Quao and laid our gear out to dry in the sun. After a while we decided to abandon the attempt to reach Cala Goloritzé and instead enjoy the sun in our little sheltered corner, until the afternoon when there was a good chance the wind would wane a bit.

The little bay was as enchanted in the sun, so we made a little photo session. We took turns to climb the rocky cliffs around the bay to take photos of the other fooling around the sheltered area in kayak. It was hot and sunny, the rocks were steep and razor sharp with dense mediterranean vegetation, which for a nordic type like me translates to sunburn and totally scratched legs, but it was fun and we got some nice photos of our kayaks in the crystal clear waters of the Golfo di Orosei. 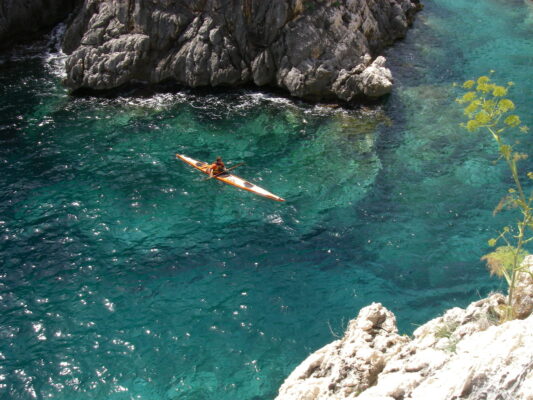 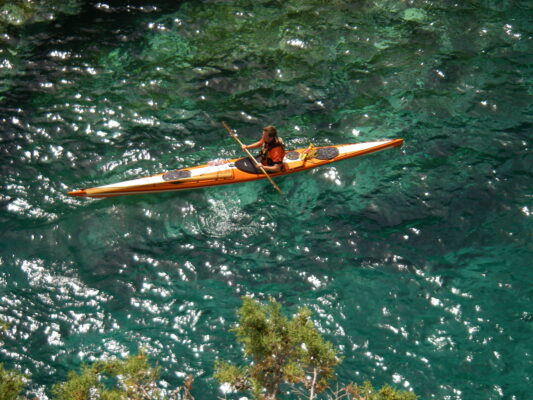 At about three thirty we got ready to return. As soon as we rounded the corner, we discovered that the wind was still a nice force 4, with swells of 1-2m but modest waves of less than 1m. It still took an effort to round Capo Monte Santu, and as we moved well away from the coast to avoid the choppy rebounding waves, we got separated and lost visual contact for extended periods.

Francesco knows his waters and was both much more confident and a lot faster than me, so he was well ahead of me most of the time and probably closer to the rock wall than I wanted to be. In any case I lost him for quite some time, and at the same time didn’t feel I had the resources to actively look for him, as the wind and waves gave me plenty to work with.

I wouldn’t say I was in trouble there, but it wasn’t easy going. The first hour took all my effort and concentration, but I did handle it in a controlled and steady way. My own feeling is that I was quite close to the limits of my abilities in a kayak, but not outside.

In the end all went well, and as soon as we were around the cape we found each other again, and we paddled together for the next couple of hours back to Santa Maria Navarrese. I was quite tired in the end, more mental tiredness than physical.

We had a coffee at Santa Maria Navarres and drove home to yet another dinner thet couldn’t be beat, and then off to bed. I slept well.