Almost had an accident

I almost had a nasty accident on my travel by motorcycle from Venice back to Copenhagen, and somebody definitely had one.

I left Venice just after noon on Thursday, and decided to drive through the night to get as far as possible before stopping to sleep.

Everything went smoothly for about a 1000km, until approx. 50km south of Leipzig. It was about 23:30 in the evening, pitch dark, and with some, but not much traffic. I was probably going at about 130-140 km/h – I did so most of the time – when I spotted something large, mangled and black rolling over the road in a cloud of sparks. I must have done something instinctive to avoid hitting it – I don’t know what – but somehow registered that an accident had happened, and I pulled into the side and stopped in the emergency lane as quickly as possible.

I had no idea what had happened, and absolutely no idea what to do about it, but I did mentally prepare myself for finding bloody mangled persons somewhere, and cursed for having left without even a basic first aid kit in my bags. I have several but left everything in Venice as I’ll need them there next year.

Two or three other cars had stopped before me, and stood in the emergency lane with their lights blinking. Two young German men were there, and I spoke shortly with them. My German is very poor, and I doubt I would have been able to place an 112 call if the other end didn’t speak decent English, so I started bullying the two Germans, “Have you called? Have you called?”, until I had them both working on their phones. Initially they had some problems getting through, but then announced that the police was on its way.

While they called 112 we inspected the scene. The first car we saw was a white van, turned on its side in the first lane of the three lane motorway. The window was shattered and milky white, and we couldn’t get to any doors – one was downwards and one upwards, higher than I could reach – and we couldn’t determine if there were anybody inside. Lorries and cars were hurling by, and we were scared of getting hit ourselves.

The white van had a trailer, a low one used for transporting cars, lying at the side in the emergency lane.

A bit down the road, still in the emergency lane, were a very badly mangled car which had clear rolled over and then crashed violently into the guard rail. Fearing the worst we looked inside, but there were nobody. Incredibly the door opened easily, and the emergency lights were blinking still. Both air bags had inflated and there was blood on the one in the driver’s side, but there were nobody.

Looking around we found the driver sitting on the other side of the guard rail, with blood on his face, apparently coming from around his eyes. I tried to speak to him, but he was very badly shocked and hardly comprehensible, but he moved, spoke something, and moved his eyes too, so even if I couldn’t talk to him, I was fairly confident he was not in a life threatening situation. He remained where he was, so we let him be.

I went back to the white van because we still haven’t found anybody there, and I feared somebody might still be inside, but we couldn’t figure out anything. We couldn’t get around it properly due to the traffic passing by. It seemed abandoned, no traces of any persons and no blood.

Another person showed up from one of the stopped cars – which had a similar trailer with a car on top – and he was going on very rapidly in Russian, gesticulating wildly, and even though we didn’t understand anything he said, and he didn’t understand any German or English, we understood somehow that he had been driving the van and had crawled out himself. He had been driving with the other Russian car, and had been there all the time.

The German guys found an emergency triangle in the crashed car and put it up a bit down the road. Just as they were doing that, a lorry almost crashed into the van on the inner lane, avoiding it by inches after a frantic manoeuvre. One of the German guys starting signalling the oncoming traffic using the display of his mobile phone, and I did the same, and seeing that most lorries moved to the middle lane and avoided the van.

The police passed on the other side of the motorway, and it took another couple of minutes before they had turned around and came back to us.

At this point there was little left for me to do. The policemen did the same things we had done, looking at the crashed cars, locating the involved persons and finding out if anybody needed immediate emergency treatment, and concluded that wasn’t the case started taking photos. Shortly after a Red Cross ambulance showed up to care for the hurt driver, and we saw nothing more of him. A while later a doctor turned up in another car and entered the Red Cross van.

I asked one of the policemen if I was still needed and was asked to stay for a little while.

The police started interrogating the Russian driver and the three of us who had stopped, collecting stories and documents. Fortunately, the two Germans had some English and could translate for me, because the policemen only spoke German, and my German is too poor for anything that serious.

It took a while, and after I had written down my name, address and licence number of my motorcycle, I got my passport back, and I was allowed to continue. I didn’t linger, there was nothing for me to do, and I wouldn’t get any wiser for it.

I departed and decided to stop at the first stop possible for think and relax a bit, but it was well over 80km before until the next stop.

Naturally, witnessing a serious accident up close makes you think, it could so easily have been fatal what I saw, but on the other side, I still had about 600km to go, at least five hours driving, and I wouldn’t be any safer having images of mangled cars and bloody drivers in my head, so I tried to push it away, think of something else and just get home.

In the end I didn’t really feel like stopping much or sleeping anywhere, so I just continued driving through the night, stopping for about half an hour every once in a while for something to drink and sometimes a little nap in the empty restaurants along the motorway. It was rather cold in the night, so I only did short stretches of 50-80km between breaks, stopping when my hands got too cold. I was a the Rostock ferry harbour at 7.30 in the morning, and got on a ferry at nine for Gedser, and I was back home just after noon, very tired.

These photos were taken with my phone after the police had arrived: 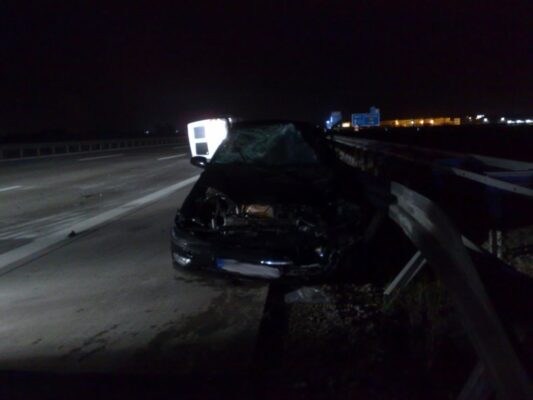 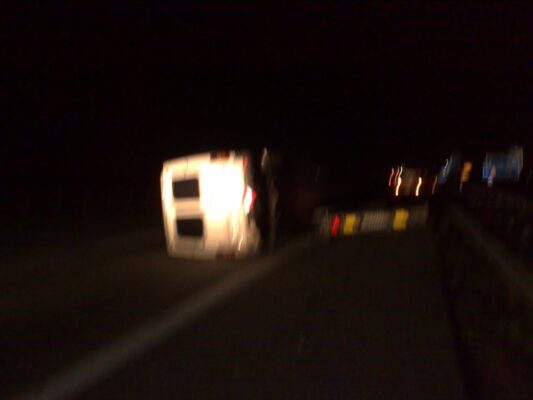 What appears to have happened is this. The van was driving in the inner lane with the empty, but very low trailer. The car, probably trying to overtake him, hit the trailer at high speed having only seen the van. At impact, the car must have done a somersault and rolled over, ending crashed into the guard rail turned 180Â° relative to the driving direction. This was what I saw and fortunately didn’t hit. The van must have received a violent forward push, directly into the chassis through the trailer hook, which turned it over. The trailer was detached as the van fell, and ended besides it.

From what I could see, the driver of the car had injuries around his eyes, but not to his eyes, probably caused by the expanding air bag, which had blood stains on it. His seat belt and the air bag probably saved his life. The driver of the van was completely unscathed, but shocked. Getting the impact from behind he had no forewarning, but the seat belt and having the larger vehicle protected him.

One response to “Almost had an accident”