About two thirds of the city has been under water, with at least 60cm of water on St. Mark’s Square. It should be enough for a good paddle, if only I had been there. 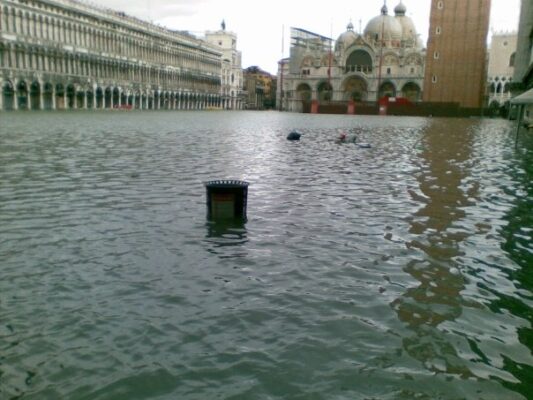 The tide was caused by a combination of several independent factors. The normal astronomical tide was only 56cm, but heavy rain in the area which drains into the lagoon and very strong SE winds in the Adriatic Sea caused the tide to build up to a much higher level than anticipated. A low pression zone on the upper Thyrrenean Sea caused heavy rain on central and northern Italy, which then moved towards the north east. On the Adriatic Sea a strong SE wind blew all night, at about 35-40 km/h, rising to 60-72 km/h in the early morning, and it continued all day.

The effect of the wind is that the tide enters the lagoon slightly higher than the astronomical tide, but the water cannot return to the Adriatic Sea later, causing one high tide to build on top of the previous. Add to this the rain, and the water level just rises and rises.

The first forecasts were for 140cm, which had to be adjusted several times during the day. The municipal tide forecast service has come under some criticism for this ‘error’ but the situation has been quite exceptional and none of the models used were able to forecast this tide correctly.

At the entrace of the lagoon at San NicolÃ² the tide arrived at 160-170cm at its highest.

At the time of the highest water level the weather in Venice was quite rough. 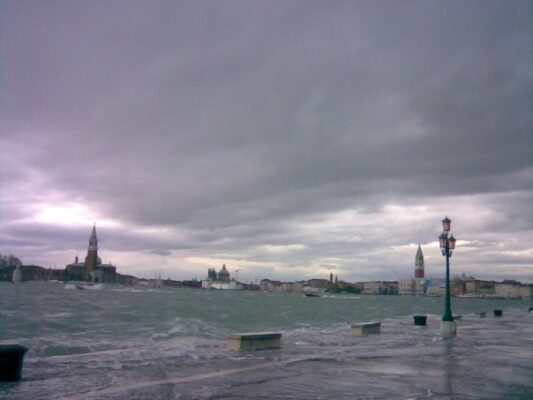 The population of Venice was alerted throughout the day by voice mail services, SMS services to 10000 subscribers (I have at least 5 or 6 messages on my phone), electronic signs on the motorways, loudspeakers in Piazzale Roma, audible alarms and sirens.

At first, based on the initial forecast, the employees of VESTA (the municipal garbage removal company) put out four kilometres of raised walking platforms used in the lower areas of the city during high tides, but they soon had to remove them again. The rising water level caused the platforms to float on the water, with the risk of people falling in the water. After the tide subsided the same people started cleaning up the city, as garbage had been left all over the place.

The employees of ACTV, the municipal public transport company, had previously declared a strike, but declined in face of the gravity of the situation. A limited number of boats circulated to ensure communication between the various islands and to pick up people stranded on vaporetto stops and elsewhere.

The photos are taken in Venice on December 1st, 2009, by Giuliana Pauletti and Riccardo Sambo.