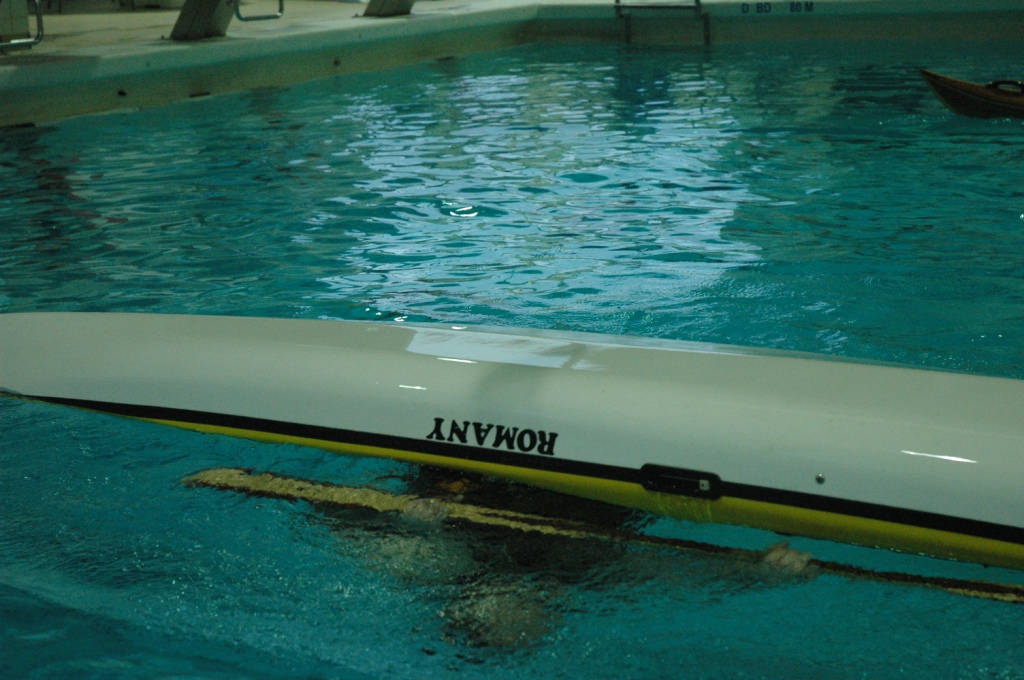 Yesterday I practised rolling in a pool for the first time in over two years. Its the first time for a long while I get some good rolling practise. My focus has been elsewhere, on touring in Sardinia, setting up a business in Venice, getting to know people and places in Venice, in general with emphasis on other skills than rolling a kayak.

My previous pool sessions were in late 2006, when I did two rolling courses to learn to roll in the first place. i did manage to learn a rudimentary C-to-C roll, but it was never reliable and I didn’t do much practice over the winter.

During a symposium in Spain in March 2007 I had a short lesson with Freya Hoffmeister, and she taught me a sweep roll and said the magic words: torso movement. She told me to lean forwards, sideways and backwards in a 1-2-3 movement and to me that made all the difference. Since then that’s what’s playing in my head when I need to roll: forwards, sideways, backwards, 1-2-3, and I usually come up (unless I rush it and skip one of the steps).

The C-to-C roll, and the butterfly roll Freya also taught me, were lost due to lack of practice. I only did the sweep roll and single-mindedly focused on getting it reliable and steady on both sides. Not that I practiced a lot. I would sometimes do a few rolls after a paddle or when I tried a new boat, or for showing off in Venice, but never really got into the “101 most essential rolls” game many others spent a lot of time playing. Until yesterday I only had one working roll in my repertoire.

Yesterday’s pool session wasn’t a course. We were a group of seven who had simply rented a public swimming pool for some hours to get some practice done and have a bit of fun. We all had some degree of rolling skills, and helped each other improve. As such it wasn’t very structured, but even without any coaching I still managed to get something working.

The C-to-C roll quickly returned, once I managed to suppress the habit of bending backwards I learned with the sweep roll.

To my surprise I managed to do a sculling roll easily, even though I’ve never even tried before. I also tried to see if I could scull the kayak the full 180Â° around, but that didn’t work out.

I’ve only done a re-entry and roll a few times before, but that was quite easy too.

I tried but butterfly roll a few times, but it didn’t work for me. I’m going to need a coach to teach me that again.

I also tried a reverse sweep roll, based on what I’ve seen people do, but it didn’t work. I didn’t even manage to get the set up position correct, I think. I’ll probably need somebody to coach me there too.

I do know how to scull with my head and shoulders in the water, but I need more practise. I have a reluctance to staying there and move up again really quickly. It’s probably some psychological I need to work with.

One of the others showed me how to do the static or balanced brace, and it did work for me once, so that’s another thing I need to work with.

While I was hard at work getting better, the others just fooled around in the children’s part of the pool 🙂

Valentina made some short videos of my efforts.

We all seem to screw around in hard-edged pools but don’t wear helmets. I have never heard of a head injury but wonder if we shouldn’t be protecting ourselves a bit better. Nice clips.

I haven’t heard of any incidents either.

I don’t think the pool edge is the biggest risk in a pool. It is much more likely the people helping and coaching get a paddle in their face.

It happened to me in Venice last summer. We were teaching some of our guests to roll on the beach. I stand in the water on the safe side of somebody attempting a roll, and he gets confused and does a very fast attempt on the ‘wrong’ side, so I got a rather hard blow to my face with a greenland paddle. It hurt 🙁 He did learn to roll, though. 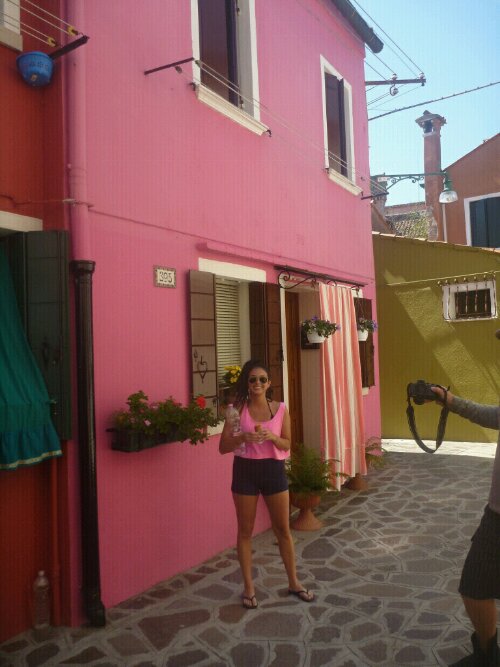 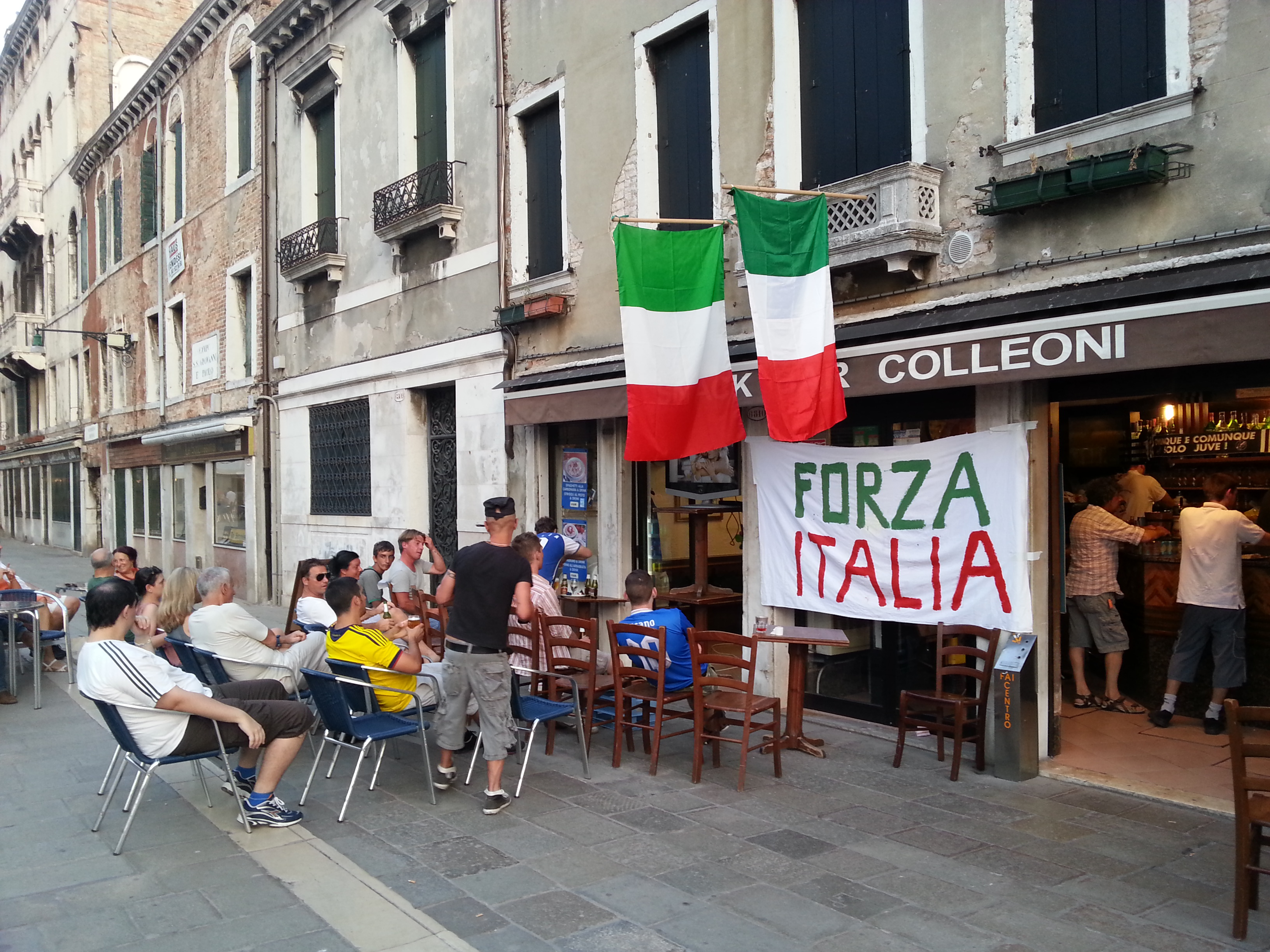