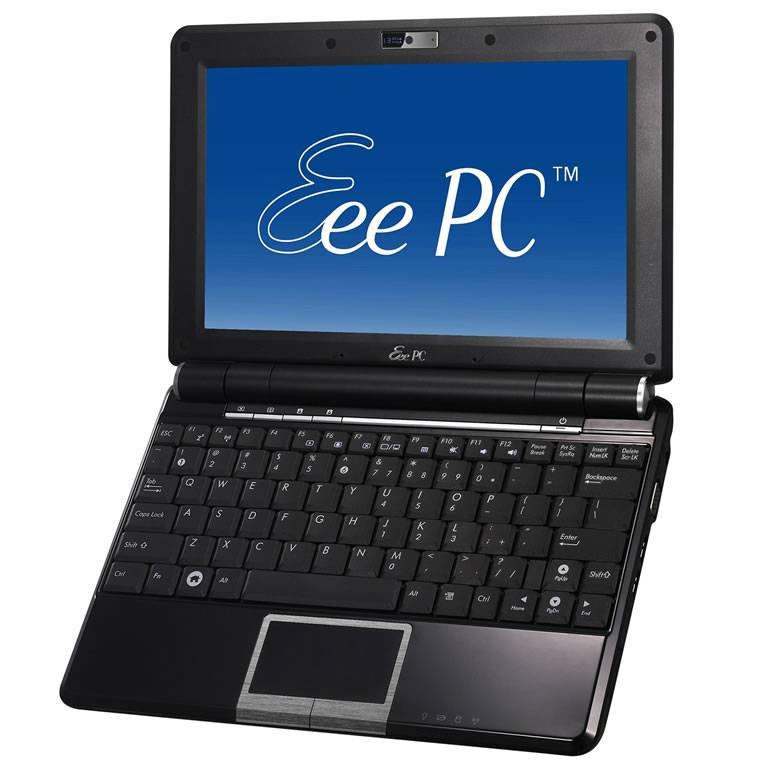 It is a fairly small laptop, measuring 27×19×3cm and weighing 1.45kg which is a bit more that I had hoped (the 901 is less than 1kg) but it is OK, as I won’t have to bring an extra USB disk for additional storage.

I have installed Debian testing/lenny on it, through the Debian Eee Pc projects installer. It is a specialised installer which does a slightly different installation and configuration, but the resulting system is a normal Debian system.
Most parts of the netbook work immediately with little or no manual configuration after a base install, but there are a few parts that doesn’t or that are a bit unstable. Most of these seem to have a solution on the way.
An install through the Debian Eee Pc installer of Debian Testing (lenny) with a Linux 2.6.26 kernel leaves these parts non-functional:

and these only partly functional:

and these require an extra effort to get fully functional:

The installation procedure was more or less as specified on the Debian Eee Pc Wiki.
The computer came with Windows XP preinstalled and with the disk partitioned in a particular way. Since I’ve paid for that Windows installation, I’d like to retain it in case I should need it later.
The harddisk was initially partitioned like this:

The partitions 1 and 4 would be needed for Windows XP and the BIOS, and I wasn’t sure what partition 3 was for, so I decided to leave it untouched. I think it is for an accelerated boot of Windows XP where they make a hibernation type snapshot at boot time which can then be used at subsequent boots to speed up things.
For Linux I would need a root, a swap and a user data partition, so I decided on this partitioning scheme:

Starting the Debian Eee PC installer was quite easy. I downloaded the image, copied it to an SD card, inserted it into the card reader and booted while pressing ESC so the BIOS asked which device to boot. The installer is the normal Debian lenny installer, only with a payload of special modules for the EeePc specific hardware, which for now include both wired and wireless network adapters and ACPI functions.
Before starting it is a good idea to disable “Boot Booster” and “Quick Boot” in the BIOS. Otherwise it is quite likely the system will just launch you into Windows XP so fast you have little time to press ESC for the boot device menu or F2 to enter the BIOS.
I had to start the installer several times to shrink and resize the Windows XP partitions and setup my own partitioning scheme as shown above.
The first several boots into the Debian installer was to shrink and resize the Windows XP installation, and setup my partition scheme. I repeatedly took the installer up to the point where it wants you to partition the harddisk, then pressed Alt-F2 to get a shell. The first time I used ntfsresize to shrink the Windows XP NTFS filesystem from 75Gb to 10Gb. Second time was to resize the actual Windows XP partition using fdisk, followed by a boot to Windows XP to make sure the installation was still bootable. Then the third time to setup the Linux partitions, and only afterwards did I let the installer continue and do the actual installation.
The Debian installer is so easy these days its almost boring. I only had to answer a few questions, enter some passwords and select what I wanted of software on the computer. I let it install all of the Gnome desktop environment, which was probably a mistake, since I had a bit of work afterwards reducing it to only the parts I actually wanted. I have no use for Windows terminal services or remote desktop systems, or all the CD/DVD ripping and mastering software I had installled automatically.

CPU – Intel Atom N270 1.6GHz works out of the box with both cores available and CPU frequency scaling activated.
Disk – the SATA disk works as expected.

Sound – works except for the front microphone, which is supported in the next version of ALSA, included in Linux 2.6.27.
SD card reader – works.
USB – works out of the box.
Wired network – the Attansic Technology L1 Gigabit network adapter uses an “atl1e” driver which works without any problems noted.
Wireless network – works partially with the rt2860sta driver included in the Debian Eee Pc install. It works for me with a WPA/PSK access point, and with an open network, but not without some problems. The driver drops the association at high throughput and subsequently fails to re-associate to the access point without a manual intervention. With a WEP setup it associated with the access point, but failed consistently to get an IP address from the DHCP server. There is no hardware kill switch.
Bluetooth – the internal USB adapter works out of the box. There is not hardware kill switch.
ACPI – this is governed by a special eeePc driver included in the Debian Eee Pc installer. It seems to support everything: power switch, lid, extra keys, battery, cpu, suspend states etc.
Video out – not yet tested
Video – Intel Mobile 945GME chipset, which works with X.org. It is automatically configured by the Debian Eee Pc install, so X windows works immediately, compositing included.
Touchpad – works partially. It is currently controlled by a generic driver, which doesn’t support all the functions of the hardware. The touchpad works as such, with tapping and the two buttons below it. The middle mouse button can be activated by a two finger tap, and a scroll wheel simulated by a two finger drag. A three finger tap works as a right button click, but it is almost impossible to get right on the small touchpad.
Extra keys – works with initialisation – see later “Hotkeysâ€
Suspend – both suspend and hibernate works through the Gnome Power Manager. I have uswsusp installed, but I don’t know if the Gnome Power Manager uses the kernel suspend functions or uswsusp. Sometimes bluetooth disappears after a resume, but I still haven’t figured out why. You need to belong to the “powerdevâ€ group to get full Gnome Power Manager functionality.
Webcam – the necessary Video4Linux drivers are automatically installed, and the camera seems to work. I can get mplayer to show me live video from it.
Keyboard – while it has nothing to do with Linux, I do have a few grievances about the keyboard. It has at least two deficiencies. While is has a nice and usable size, the right shift key is placed in a very annoying position, to the right of the “up” arrow key, which I alway hit by mistake. Also, the shift lock key has no status indicator anywhere, so you cannot see if shift lock is on or off, except trying to type something.

Basic X.org configuration was automatic.
The X.org server uses the “intelâ€ driver for the Intel 945GME graphics chip set. It is by default set up with EXA acceleration, but the Debian Eee Pc wiki states that using XAA might be better, and my experience confirms it. It feels quite a bit snappier with XAA, especially when scrolling in Firefox.
DRI was configured automatically.
The touchpad it is an Elantech touchpad but it is not recognised as such by the kernel. It detected as a “ExplorerPS/2â€, not as a proper touchpad. The funny thing is, however, that the touchpad still works to some degree. It reacts to movement and taps, there is a scroll wheel area on the right side of it, and a two finger tab becomes a middle click. A three-finger tap becomes a right click but it is very hard to reproduce reliably. There seems to be a driver for the touchpad in the working, but it’s currently only semi-functional. I haven’t delved deeper into this, as it does work.
Compiz was only an “aptitude install compiz” away. All the necessary prerequisites were taken care of by the Debian Eee Pc installer.

The keyboard has some special keys, which are handled by a special eeepc ACPI module.
I had to edit the /etc/default/eeepc-acpi-scripts file to get the sound volume keys to work properly. I needed to set the variables

Apparently the default setup is for the latest Alsa release, but not the one used by the 2.6.26 kernel.