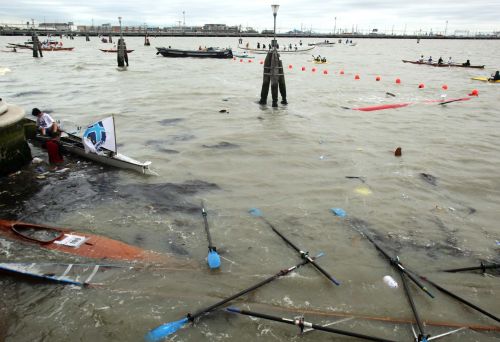 The 35th Vogalonga was held on May 31st, on the Sunday following Ascension as tradition dictates.

The Vogalonga is a 30km non-competitive “race” through the city of Venice and the lagoon. It starts a 9 from St. Mark’s with a cannon shot, and proceeds around Sant’Elena, past the islands of Certosa, Le Vignole, Sant’Erasmo, San Francesco in Deserto, Burano, Mazzorba, San Giacomo in Palude, Murano back to Venice for a final trip down the Canal Grande back to the finish at St. Mark’s.

As an exception to an otherwise firm rule, Venice Kayak rents kayaks for the day of the Vogalonga, so we were a bunch of people launching from the camp site, in addition to the maybe 50 or more other kayaks, canoes, inflatables and other boats starting from there too.

Marco and I had to get everybody off safely, so we launched last, at about 8.30, with the prospect of not getting to the start on time, as the paddle to St. Mark’s normally takes about 40 minutes.

The weather gave us a hand, though, for which we paid dearly later. The forecast was for a NE wind, turning ENE later, of force 4 to 5 for most of the day. The sky was ominous, dark and menacing, but we were spared any rain during the day. The only trial would be the wind.

With a F4-5 tail wind and waves of Â½m we half paddled, half surfed down the Canale San NicolÃ² and around Sant’Elena to St. Mark’s, where we arrived in less the 20 minutes, well before the cannon blast and the start of the Vogalonga.

The start was as chaotic as ever. One thousand five hundred boats or more, assembled without any order or system, all starting at the same time, is bound to create some disorder. Being in a small vessel you need to be careful and look over your shoulder every once in a while. A gondolone with twelve, fourteen or eighteen oarsmen cannot turn or stop in a jiffy, and the many backwards rowers often have little idea of where they’re going or what they’re hitting.

The first critical point was when we turned left at Sant’Elena, straight into the wind. Many rowers weren’t prepared for the wind that suddenly hit them, and had difficulties turning the corner. A caorlina just in front of me completely cost control and veered to the right, straight across the path of many other boats struggling to turn left. Much shouting ensued, but being behind and left of the fight I didn’t get involved.

The next 15km was one long hard slug into the headwind. Initially, the canals there were narrow and the field still close together, so there was little choice but to keep up with the speed of the others. The average speed of the many Venetian boats with four, six, eight or more oarsmen was around 5km/h in spite of the headwind, so we just had to push harder and keep up with them.

After a while I spotted Marco maybe 200m ahead of me, paddling in a leisurely pace just in the wake of an eight oarsmen gondolone, shielded from the wind by the much higher Venetian boat, and I started paddling even harder to catch up with him. I didn’t gain one metre on him, but I did succeed in geting very tired way too soon during the Vogalonga. After a while I gave up and found a similar place in the wake of a caorlina, where I could relax a bit. There were still over 20km left of the trip, and I had no intention of pushing myself out of the race.

I followed other boats like that for a good part of the northward part of the itinerary, breaking away every once in a while to try to take some photos. It was almost impossible to photograph anything. As soon as I stopped paddling, even for the few seconds it took to pull the camera out of the pocket to turn it on and drop it on the spraydeck, the wind would cause me to lose speed and turn sideways across the path of the others. The few photos I did manage to take were almost all shaken because I had to lower the camera before the autofocus has finished.

As we turned left around San Francesco del Desterto towards Burano I made a small mistake. Most other boats kept a course more to the left, downwind, which seemed to take them south of Burano, not north of the island as the official itinerary said. I assumed they had been blown a bit off course by the strong winds, so I kept more to the right towards the northern side of Burano. As a consequence I ended in secca, in shallow waters due to the low tide, and for about 1-2km I had to fight the winds from my right with only 10-15cm under the keel. Had the tide been just a little bit lower, I would have been stuck.

As I approached Burano and finally got enough water under the boat to paddle faster, a completely devastated Marco pulled up besides me. He had ended up behind me earlier because he wanted to take some pictures, and had had to paddle like a madman to catch up.

We agreed on taking a break after we had rounded Burano, in the canal at Mazzorba, where the wind would be in our favour. We picked up some drinks and bananas at a service boat in the canal, and as I ate my bananas and drank the sugary greenish stuff they had give us, Marco paddled across the canal to say hello to a friend. I drifted along, leaving Mazzorba towards the island of Madonna del Monte, while I took photos of the passing boats.

Each year in the Vogalonga there seemsÂ  to be a boat that attracts more attention than the others, and it usually involves female rowers for some unknown reason. Last year it was a beautiful wooden sandolo with a couple dress in white with golden scarfs, and this year it was a smaller sandolo or mascareta rowed by four women from the Remiera Querini in Venice.Â  The boat was adorned with blue flowers and the girls dressed in matching colours.

Most rowers were relieved of having turned the corner and now having a good strong tail wind, but for some the problems seemed to get worse. Many of the backwards rowers seemed to have problems with the following waves, and many went way off course. A black gondola, the only one I saw doing the Vogalonga, also went off course at times, but they definitely made it, as I saw them later in the city.

The strong winds and the open landscape in the middle of the lagoon gave more and larger waves than I have ever seen in the lagoon. As I approached Murano, especially after I had passed the island of San Giacomo in Palude, the waves were between Â½m and 1m, which is a lot in a shallow lagoon. It was definitely enough for me to catch a wave and surf a little. I had loads of fun, until a backwards boat almost rammed me from behind as I was waiting for a wave.

I was full of energy as I entered Murano and continued towards S. Alvise on the NW side of Venice. The official route was towards S. Alvise then right to the start if the Canale Cannaregio where we were to enter the city canals.

The waves were building up as I came closer to S. Alvise, and they were now mostly around 1m from the back slightly on the right side. When I was almost at the Canale Cannaregio, I had to do a detour because a large area was closed off by a floating barrier. As I paddled around the area, I noticed a sunk dragonboat and two or more backwards boats in the water, in a mess of oars and other stuff from the capsized and sunken boats. A couple of persons were swimming inside the area, apparently trying to collect oars and other floating items.

The Canale Cannaregio, especially at the Ponte Tre Archi, is another critical point where boats often pile up. This time is wasn’t that bad, but the backwards people still caused problems as they had problems getting through, even hitting the central arch with getting too close to the sides.

Once I was through the Canale Cannaregio and into the Canal Grande everything eased up and traffic flowed without problems. There were no vaporetti or taxis, and very few gondolas. It was a fantastic experience paddling slowly down the completely quiet Canal Grande which hardly had a ripple on the surface.

At the finish I got my diploma and medal, and moved over to the side to watch the others coming in. Marco arrived soon after, as did the gondolone from the rowing club Diadora (where I’m a member now) with Lino Farnea a poppa, and the splendid red peata from the Remiera del Brenta.

Tony from the UK was the only one of ‘our’ paddlers who came in at that time, and the three of us started our return paddle towards the Lido. To avoid having to fight the wind again around Sant’Elena, we went through the inner city canals until we came out at San Pietro in Castello, which is little more then 1 km from the camp site.

We returned very tired, with the expectation of finding several of our guests there, as it was clear that a substantial number of participants had dropped out of this year’s Vogalonga. To our surprise there was nobody.

They all came back in ones and twos during the afternoon, and everybody who started made it through to the finish. Most were completely exhausted after many hours fighting the headwind, but also content.

According to what I’ve heard and read afterwards, the Vogalonga 2009 was the hardest ever. Over 100 boats left the race shortly after the start when they got hit by the headwinds at Sant’Elena, many others were blown on ground in too shallow waters, and some 30 boats sank or capsized at the Canale Cannaregio. About 80 rowers ended in the water there, and 20 in hospital with minor injuries.

Well,
I was planning to go there and also paddle two monhs the Adriatic Sea..But i missed all the fun. Two weeks before going off i did fall down and this keeps me busy for almost two months now. My knee can not bend and end of June i will finally go to the hospital.

So i missed also the Bibionefestival…well maybe another time.
Your images give me a little comfort though.

Hi Jörgen,
I missed out on Bibione as well, as I had to return to Denmark after the Vogalonga for family matters.
I hope you’ll be all well and that you can come to Venice another time.
René

What a good article Rene, great pictures, it certainly sums up the weather. I thought about taking some pics but felt it was more prudent to keep two hands on the paddle.
After we got back to the UK and thought about that wind!!! Just amazing.
A great day out see you next year if not before. 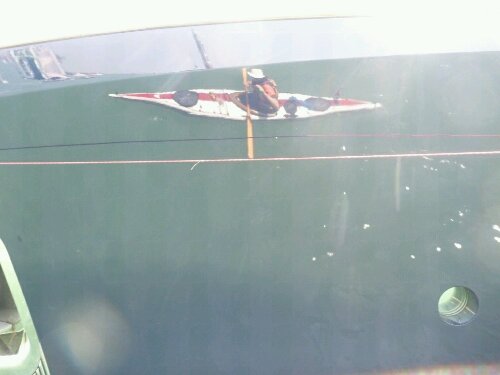 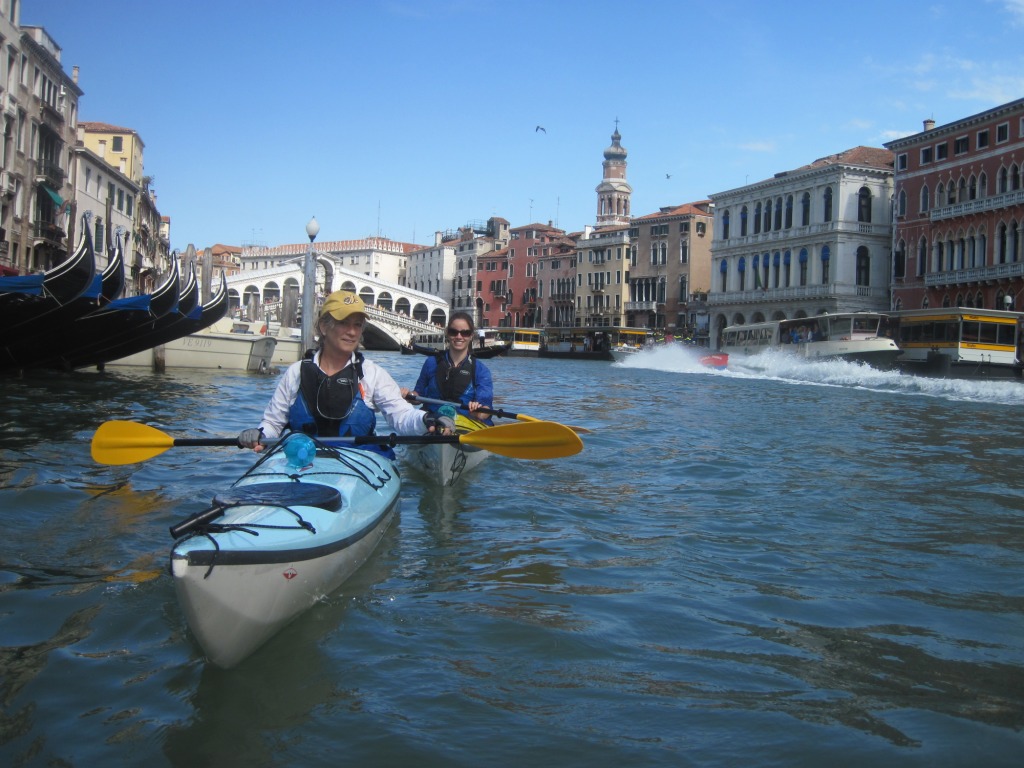 Fire Brigade on the Canalazzo 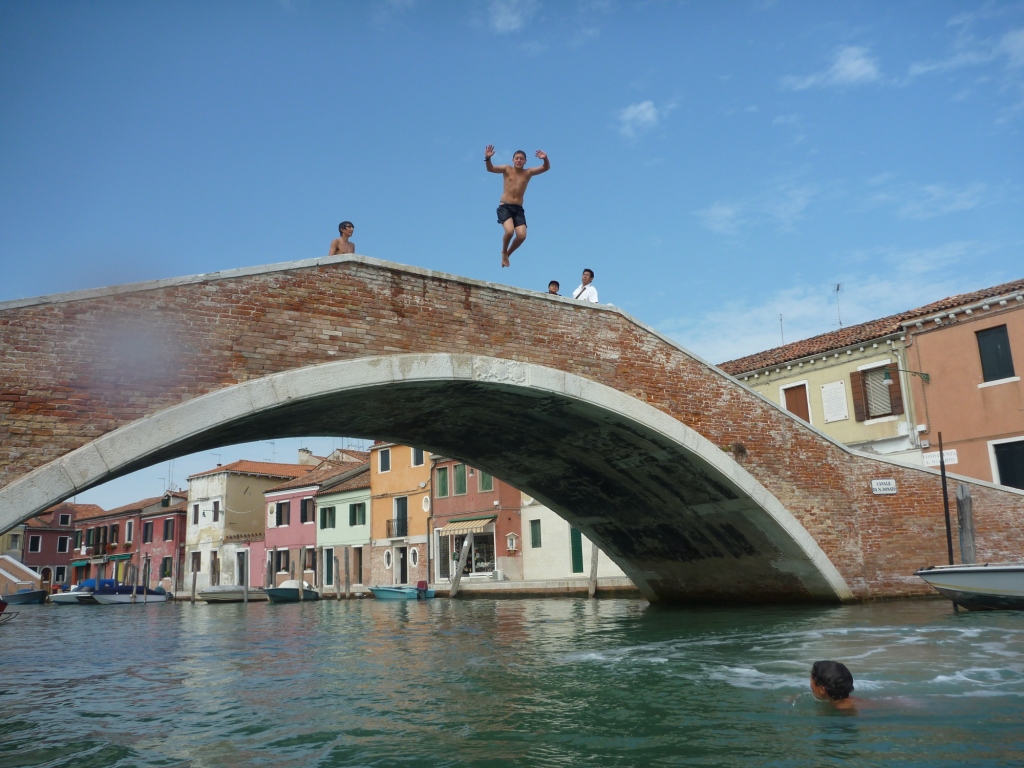