I’m back in Denmark now. I started Thursday morning from the motel north of WÃ¼rzburg, with frost on the motorcycle. Fortunately, it started promptly, but it was a cold start of the day. 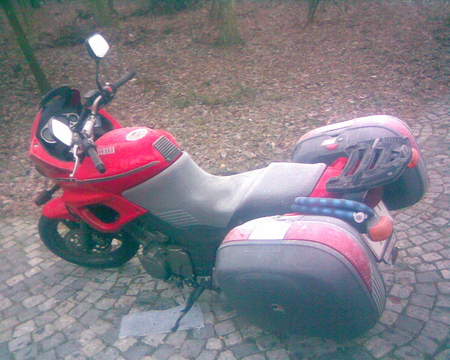 When I started the thermometer on the dashboard showed 0Â° C, but as I moved northward it became milder, and most of the day I had 5-10Â° C and could put on a bit more speed.

The first time I had to get gasoline, I couldn’t open the gas tank lid. The key wouldn’t get all the way in. I had to warm the key in my hands to heat it enough to melt the droplet of ice in the lock.

I almost missed the exit towards Kassel, and did some fairly stupid manoeuvres at the exit to get back on track.

Close to Hamburg I saw a motorbike or large scooter on the motorway, but it turn off the motorway before I could have a look. It is the only two wheeler I have seen since I left Italy.

North of Hamburg it started to rain and it got dark, so I had to slow down again. I only had about 100 km to the border, so I just drove with the lorries at their speed.

I had rain and wet roads all the way up Jutland. My destination was VidebÃ¦k between Herning and RingkÃ¸bing, which is were my wife works. The last 100 kms were on main roads in the countryside, which wasn’t a nice experience. The lorries drive fast there too, and when they pass you in the opposite direction, they create a forceful drag full of water droplets they lift from the wet road. Its like getting sprayed in the face with high pressure water.

Now I’m relaxing a bit here in Jutland. It seems like I will be driving to Copenhagen on Tuesday, based on the weather forecasts. It’ll be the only day without too much rain and wind in the coming week.
View Larger Map

Motorcycle, On the road