I’m on my way back to Denmark. I started Monday from Rome and made it to Venice, where I had to wait for the next day to pick up my bag, and send a few things back to Palermo. Tuesday afternoon at 17:30 I was back on the motorway heading home.

The first part of the journey, from Venice to Trento, was OK. The weather was fine and I made good progress. As I started to climb up towards the Brenner pass, and night fell, it started to get really cold. Nominally it wasn’t really that cold, maybe 5Â°C, but add the chill factor of 150 km/h and you’ll start to feel it a bit. It was dark too so I had to slow down, but at least then I could feel my fingers just a little bit.

I’ve never seen snow clad mountains at night before. Its a very special sight, quite impressive.

When I reached the pass at about eleven in the evening, it started to snow too. I still had 25 km to reach InnsbrÃ¼ck and its definitely the first time ever I’ve been driving at 40 km/h on an almost deserted motorway, being overtaken by the occasional long haul lorry. Driving a motorcycle at midnight in pitch darkness on a mountain motorway while its snowing is not my kind of fun. Actually, it wasn’t fun at all.

I was so eager to get off the motorway that I just picked the first exit that said InnsbrÃ¼ck, which happened to dump me on some deserted mountain road some 5 km south of the city, so I spend another half an hour crawling down the hair pin turns towards the city further down the valley. It was one at night before I had found a hotel and a bed.

This morning I started from InnsbrÃ¼ck and I’ve just been following the E45 all the time. For a Dane with a Sicilian wife the E45 is all you need to know. It starts in Sicily and winds it’s way up Italy, Austria, Germany to Denmark, from where it continues to Nordkapp in Norway.

It was still very cold this morning, and I didn’t dare go too fast, in case there was ice on the road, so I just stayed in the outer lane with all the lorries, doing 90-100 km/h. After about half an hour my fingers were so cold they started to pain, and I had to stop to warm them with some coffee. Most of the day has been like that. Half an hour on the road and half an hour in an auto-grill warming up again.

I found a little thermometer in a shop on the road, and glued it to the dashboard. Its been 3-5Â°C most of the day, but the temperature dropped a bit at sunset, to 1-2Â°C at 17:30. I don’t want to drive in the dark if the temperatures drop below zero, so I’m now at a motel on the A7/E45 just north of WÃ¼rzburg.

This must be the slowest motorcycle journey I have even done. I have managed to do just 400 km on Tuesday, and another 400 km today, so I still have over 600 km before I’m home. I should be home tomorrow, though, because the weather forecasts promise milder weather in northern Germany than in the south. I do, however, risk getting some rain tomorrow.

I don’t dare think about how I look on the road. I have so many layers of clothes on. First I have a set of Merino wool leggings and shirt, then a fleece jacket, then a jogging set, then my old Dainese leather suit and over that my new Kokatat anorak. I wear two sets of gloves, a woolen set under the leather gloves, and still my hands get as frozen as glacial ice. My feet get cold too, because I haven’t brought woolen socks, but they’re not as exposed as the hands. I close the fleece and jogging jackets all the way up, then put a Kokatat turtleneck on top, and close the anorak all the way up to my nose. I also put on the hood under the helmet. It gives me a burka like field of vision, but it is great for keeping out the cold. Driving like that I’m not all that cold, except for my hands.

Here’s the fully loaded motorbike. The rucksack on the top contains the stuff I sent to Palermo, so its not with me anymore. I’ve had quite a bit of problems getting my Avatak Aleutina paddle to sit there, but I think I have sorted it out. At least its still with me. 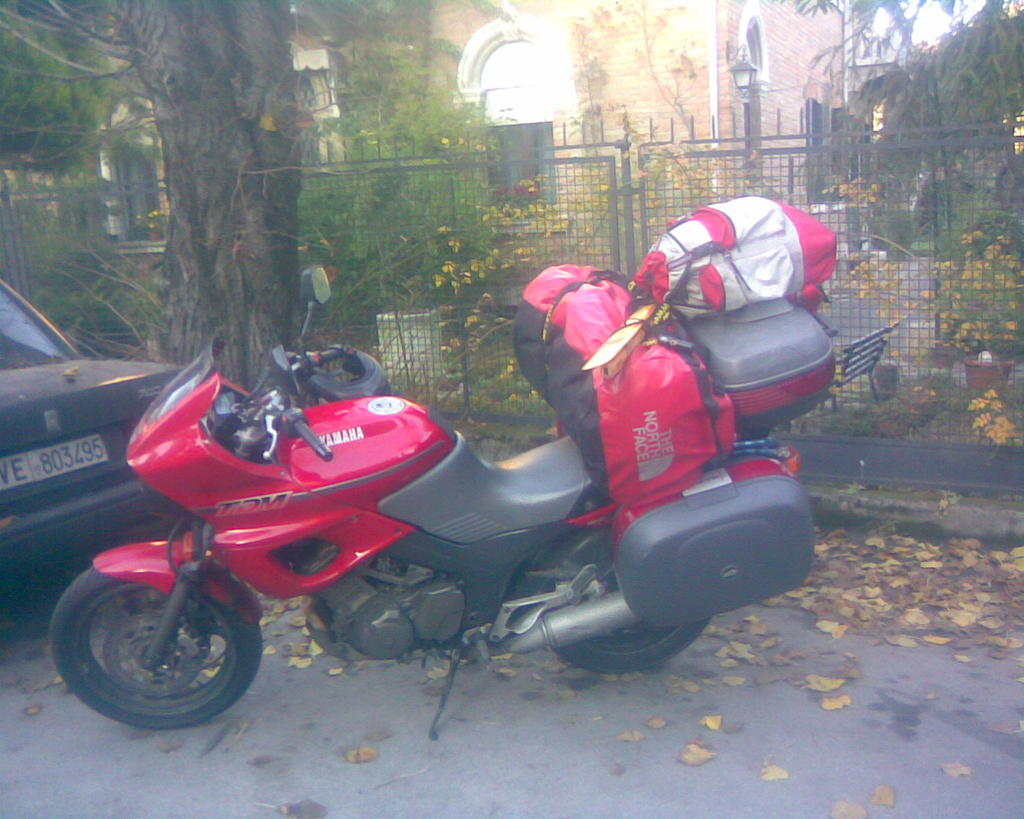 The days on Google maps