Kayaking ban in Venice – dialogue with the city administration

Venice has issued a ban on kayaks, canoes, dragon boats and more, which is effective from Sunday, March 1st.

Currently it is illegal to go by kayak, canoe or dragon boat on the Grand Canal and several other canals in the city.

As a consequence, the city’s canal network has been cut to pieces, from a kayaker’s point of view, where it is not longer possible to go from one part to another.

Today I have had a meeting with the city official who have signed the new regulations, and it was not as bad as I had anticipated.

As things stand now, the ban is there and it is an offence to even paddle across the no-go canals.

However, the city administrators have finally understood that they have made a mistake by issuing a blanket ban like they have. Being unable to turn back, there will be a modification to the new rules, which will give kayaks, canoes and dragon boats more room so it will be possible to move around the city in a reasonably rational way.

In short, there will be some points on the no-go canals where passage will be allowed, most notably on the Grand Canal. There will be some limits on when you can pass, it’ll be mostly in the afternoon, and maybe even on who can pass, for example a requirement that there is a qualified coach in a group of kayaks.

It is my hope that they will also allow passage, at least in the afternoon, on parts of the lower Canal Grande, so we can still visit the ancient gondola shipyards in the Dorsoduro area, which will otherwise be unreachable.

While this will not be a perfect solution, it will be a marked improvement on the no-exceptions-allowed ban they have made for now.

The changes from February 11th were published after a meeting of what they call a conferenza dei servizi, where all the different public bodies meet to coordinate.

A change to the new rules will have to pass the same way. This means that there will be a meeting on March 12th, where a commission will meet to prepare everything for the next meeting of the conferenza dei servizi, where a change can be formally decided.

Once we get there, we’ll know what they’ll come up with.

I do not know the date of the next meeting of the conferenza dei servizi, but I’ve been told that they’re normally held once a month.

The legal challenge to the kayaking ban in Venice will not stop before the city administration publishes what exactly they intend to do, and they cannot do that before the meeting of the conferenza dei servizi has met, and at than point they have also decided.

There will be no public hearing, beside the kind of privately requested meetings with city officials, like the one I had today.

The Arcobaleno association has no intend of backing down before they know what the new rules will be, so the process will go forward.

The collection of funds in support of the legal challenge continues.

My appointment today was on behalf of my company Venice Kayak, so I did not represent anybody else there.

Besides explanations about what we’re doing — kayaking excursions in Venice lead by qualified guides, and not any kind of rental to whoever shows up — the discussion was mostly about what kind of modifications we would need to be able to continue our work.

This maps shows the ‘dispensations’ we’ll need to be able to carry on in the way we have done now in seven years, without accidents or conflicts. 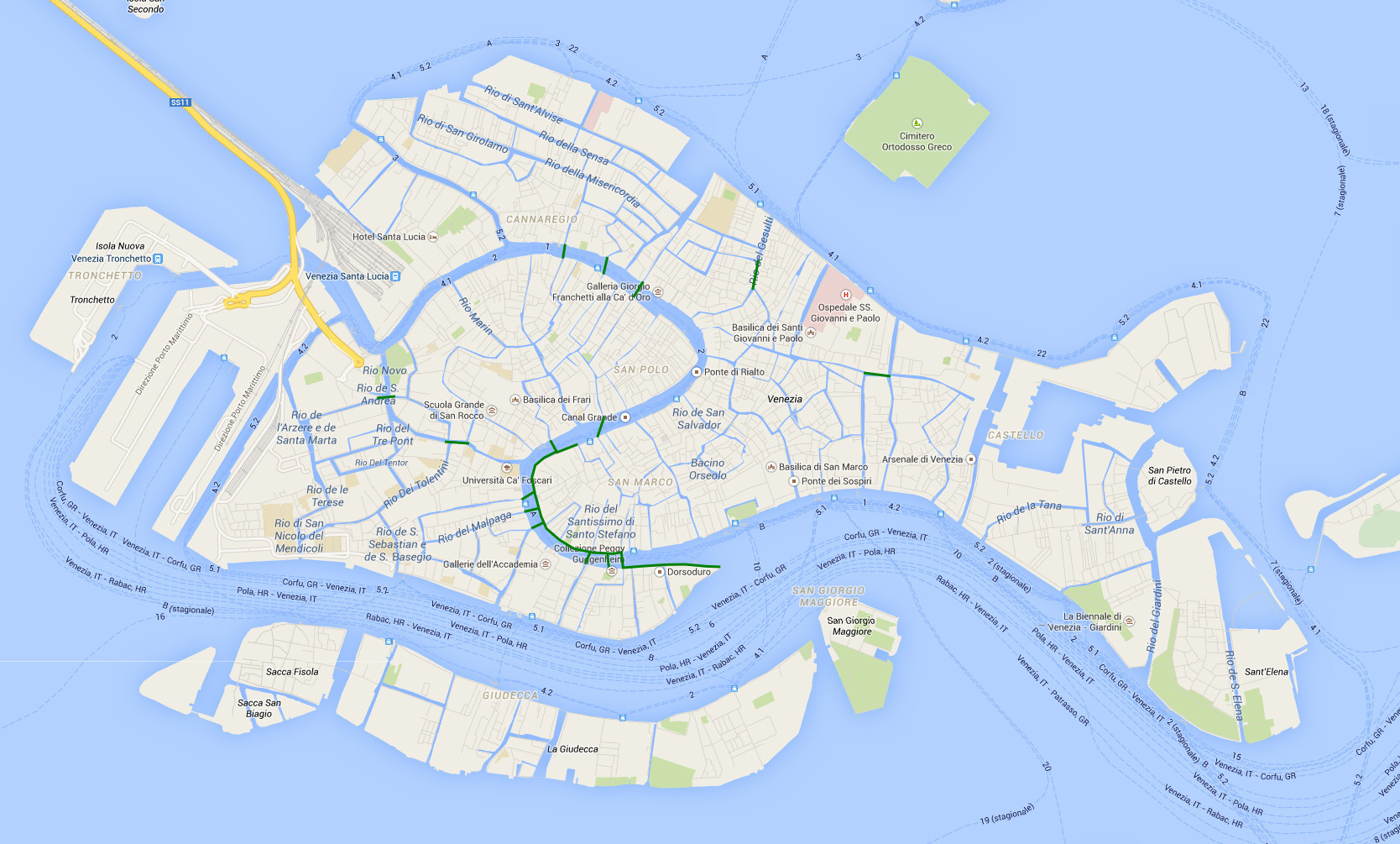 For now we’re crossing our fingers, hoping for the best.

If the city administration cannot come up with a working solution for us and the other paddlers in Venice, we will have no choice but the throw all our effort at the legal challenge the Arcobaleno association is preparing.