I’m sitting in a very cheap hotel room, clean though, in Mestre. I’m here to pick up the stuff Wendy and I left here when we departed for Sardinia in September. Back them we expected to return on our way back north after a successful journey, but a capricious Fortuna wanted it otherwise.

Tomorrow I will meet up with my friend Marco and go to the Lido where my monster bag is kept.

The trip here was quite eventless. Traffic on the motorways were surprisingly light, except on the last part. The motorway Milan-Venice never rests, apparently.

I made a regular stop on the motorway near Arezzo, for coffee and gasoline. When I came out of the shop a police car drove slowly by, apparently having a close look by my motorcycle. It stopped a little bit ahead and waited. As I got ready to roll over for gasoline, another police car did the same. It stopped besides the first. Only as I drove by the two police cars did I understand what they were doing.

Two weeks ago a young man, a fan of the Lazio soccer team, was shot dead just there, in front of the shop, as he was sitting in a car with his friends. The killer was a policeman who shot from a distance of 200m, warning shots, he claimed. Circumstances are still unclear, but the policeman is indicted for manslaughter.

Just in front of the two police cars were an improvised memorial for the young man, made of flowers, photos and blue/white Lazio sharves, caps, banners and other soccer fan accessories. 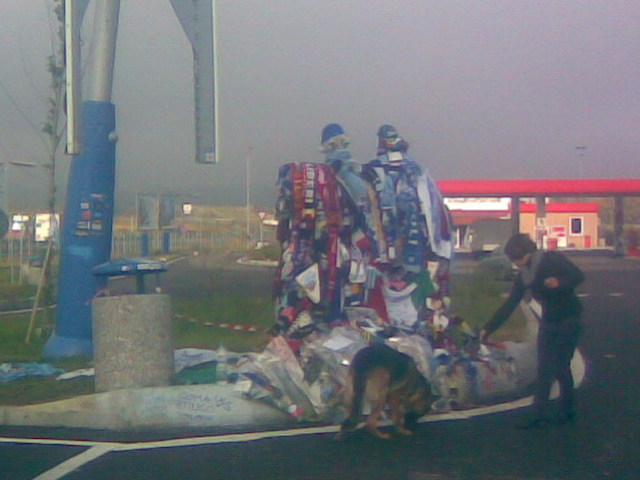 Fortuna is not always a welcome visitor.

One response to “Motorway day”